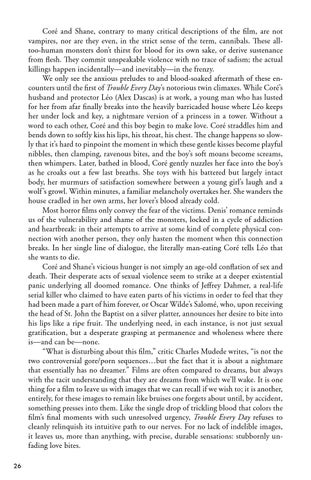 Coré and Shane, contrary to many critical descriptions of the film, are not vampires, nor are they even, in the strict sense of the term, cannibals. These alltoo-human monsters don’t thirst for blood for its own sake, or derive sustenance from flesh. They commit unspeakable violence with no trace of sadism; the actual killings happen incidentally—and inevitably—in the frenzy. We only see the anxious preludes to and blood-soaked aftermath of these encounters until the first of Trouble Every Day’s notorious twin climaxes. While Coré’s husband and protector Léo (Alex Dascas) is at work, a young man who has lusted for her from afar finally breaks into the heavily barricaded house where Léo keeps her under lock and key, a nightmare version of a princess in a tower. Without a word to each other, Coré and this boy begin to make love. Coré straddles him and bends down to softly kiss his lips, his throat, his chest. The change happens so slowly that it’s hard to pinpoint the moment in which these gentle kisses become playful nibbles, then clamping, ravenous bites, and the boy’s soft moans become screams, then whimpers. Later, bathed in blood, Coré gently nuzzles her face into the boy’s as he croaks out a few last breaths. She toys with his battered but largely intact body, her murmurs of satisfaction somewhere between a young girl’s laugh and a wolf ’s growl. Within minutes, a familiar melancholy overtakes her. She wanders the house cradled in her own arms, her lover’s blood already cold. Most horror films only convey the fear of the victims. Denis’ romance reminds us of the vulnerability and shame of the monsters, locked in a cycle of addiction and heartbreak: in their attempts to arrive at some kind of complete physical connection with another person, they only hasten the moment when this connection breaks. In her single line of dialogue, the literally man-eating Coré tells Léo that she wants to die. Coré and Shane’s vicious hunger is not simply an age-old conflation of sex and death. Their desperate acts of sexual violence seem to strike at a deeper existential panic underlying all doomed romance. One thinks of Jeffrey Dahmer, a real-life serial killer who claimed to have eaten parts of his victims in order to feel that they had been made a part of him forever, or Oscar Wilde’s Salomé, who, upon receiving the head of St. John the Baptist on a silver platter, announces her desire to bite into his lips like a ripe fruit. The underlying need, in each instance, is not just sexual gratification, but a desperate grasping at permanence and wholeness where there is—and can be—none. “What is disturbing about this film,” critic Charles Mudede writes, “is not the two controversial gore/porn sequences…but the fact that it is about a nightmare that essentially has no dreamer.” Films are often compared to dreams, but always with the tacit understanding that they are dreams from which we’ll wake. It is one thing for a film to leave us with images that we can recall if we wish to; it is another, entirely, for these images to remain like bruises one forgets about until, by accident, something presses into them. Like the single drop of trickling blood that colors the film’s final moments with such unresolved urgency, Trouble Every Day refuses to cleanly relinquish its intuitive path to our nerves. For no lack of indelible images, it leaves us, more than anything, with precise, durable sensations: stubbornly unfading love bites. 26