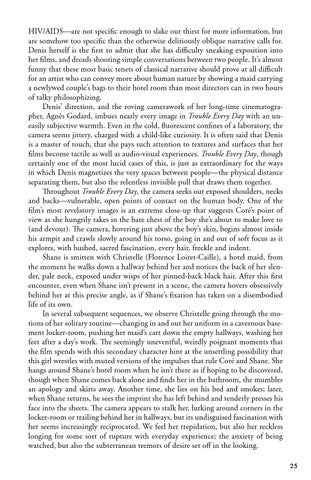 HIV/AIDS—are not specific enough to slake our thirst for more information, but are somehow too specific than the otherwise deliriously oblique narrative calls for. Denis herself is the first to admit that she has difficulty sneaking exposition into her films, and dreads shooting simple conversations between two people. It’s almost funny that these most basic tenets of classical narrative should prove at all difficult for an artist who can convey more about human nature by showing a maid carrying a newlywed couple’s bags to their hotel room than most directors can in two hours of talky philosophizing. Denis’ direction, and the roving camerawork of her long-time cinematographer, Agnès Godard, imbues nearly every image in Trouble Every Day with an uneasily subjective warmth. Even in the cold, fluorescent confines of a laboratory, the camera seems jittery, charged with a child-like curiosity. It is often said that Denis is a master of touch, that she pays such attention to textures and surfaces that her films become tactile as well as audio-visual experiences. Trouble Every Day, though certainly one of the most lucid cases of this, is just as extraordinary for the ways in which Denis magnetizes the very spaces between people—the physical distance separating them, but also the relentless invisible pull that draws them together. Throughout Trouble Every Day, the camera seeks out exposed shoulders, necks and backs—vulnerable, open points of contact on the human body. One of the film’s most revelatory images is an extreme close-up that suggests Coré’s point of view as she hungrily takes in the bare chest of the boy she’s about to make love to (and devour). The camera, hovering just above the boy’s skin, begins almost inside his armpit and crawls slowly around his torso, going in and out of soft focus as it explores, with hushed, sacred fascination, every hair, freckle and indent. Shane is smitten with Christelle (Florence Loiret-Caille), a hotel maid, from the moment he walks down a hallway behind her and notices the back of her slender, pale neck, exposed under wisps of her pinned-back black hair. After this first encounter, even when Shane isn’t present in a scene, the camera hovers obsessively behind her at this precise angle, as if Shane’s fixation has taken on a disembodied life of its own. In several subsequent sequences, we observe Christelle going through the motions of her solitary routine—changing in and out her uniform in a cavernous basement locker-room, pushing her maid’s cart down the empty hallways, washing her feet after a day’s work. The seemingly uneventful, weirdly poignant moments that the film spends with this secondary character hint at the unsettling possibility that this girl wrestles with muted versions of the impulses that rule Coré and Shane. She hangs around Shane’s hotel room when he isn’t there as if hoping to be discovered, though when Shane comes back alone and finds her in the bathroom, she mumbles an apology and skirts away. Another time, she lies on his bed and smokes; later, when Shane returns, he sees the imprint she has left behind and tenderly presses his face into the sheets. The camera appears to stalk her, lurking around corners in the locker-room or trailing behind her in hallways, but its undisguised fascination with her seems increasingly reciprocated. We feel her trepidation, but also her reckless longing for some sort of rupture with everyday experience; the anxiety of being watched, but also the subterranean tremors of desire set off in the looking. 25