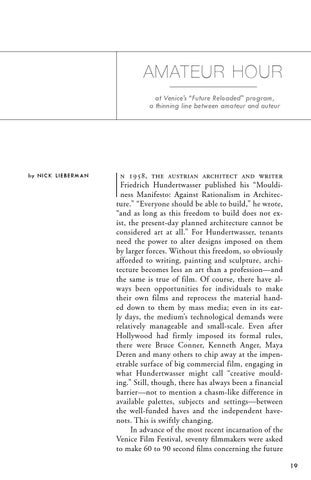 n 1958, the austrian architect and writer Friedrich Hundertwasser published his “Mouldiness Manifesto: Against Rationalism in Architecture.” “Everyone should be able to build,” he wrote, “and as long as this freedom to build does not exist, the present-day planned architecture cannot be considered art at all.” For Hundertwasser, tenants need the power to alter designs imposed on them by larger forces. Without this freedom, so obviously afforded to writing, painting and sculpture, architecture becomes less an art than a profession—and the same is true of film. Of course, there have always been opportunities for individuals to make their own films and reprocess the material handed down to them by mass media; even in its early days, the medium’s technological demands were relatively manageable and small-scale. Even after Hollywood had firmly imposed its formal rules, there were Bruce Conner, Kenneth Anger, Maya Deren and many others to chip away at the impenetrable surface of big commercial film, engaging in what Hundertwasser might call “creative moulding.” Still, though, there has always been a financial barrier—not to mention a chasm-like difference in available palettes, subjects and settings—between the well-funded haves and the independent havenots. This is swiftly changing. In advance of the most recent incarnation of the Venice Film Festival, seventy filmmakers were asked to make 60 to 90 second films concerning the future 19