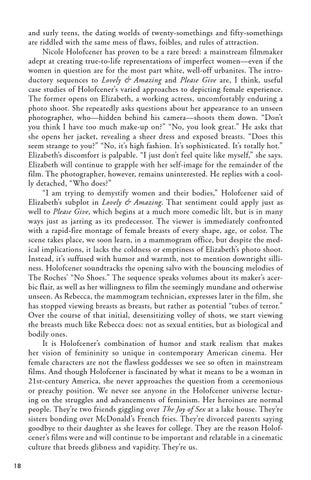 and surly teens, the dating worlds of twenty-somethings and fifty-somethings are riddled with the same mess of flaws, foibles, and rules of attraction. Nicole Holofcener has proven to be a rare breed: a mainstream filmmaker adept at creating true-to-life representations of imperfect women—even if the women in question are for the most part white, well-off urbanites. The introductory sequences to Lovely & Amazing and Please Give are, I think, useful case studies of Holofcener’s varied approaches to depicting female experience. The former opens on Elizabeth, a working actress, uncomfortably enduring a photo shoot. She repeatedly asks questions about her appearance to an unseen photographer, who—hidden behind his camera—shoots them down. “Don’t you think I have too much make-up on?” “No, you look great.” He asks that she opens her jacket, revealing a sheer dress and exposed breasts. “Does this seem strange to you?” “No, it’s high fashion. It’s sophisticated. It’s totally hot.” Elizabeth’s discomfort is palpable. “I just don’t feel quite like myself,” she says. Elizabeth will continue to grapple with her self-image for the remainder of the film. The photographer, however, remains uninterested. He replies with a coolly detached, “Who does?” “I am trying to demystify women and their bodies,” Holofcener said of Elizabeth’s subplot in Lovely & Amazing. That sentiment could apply just as well to Please Give, which begins at a much more comedic lilt, but is in many ways just as jarring as its predecessor. The viewer is immediately confronted with a rapid-fire montage of female breasts of every shape, age, or color. The scene takes place, we soon learn, in a mammogram office, but despite the medical implications, it lacks the coldness or emptiness of Elizabeth’s photo shoot. Instead, it’s suffused with humor and warmth, not to mention downright silliness. Holofcener soundtracks the opening salvo with the bouncing melodies of The Roches’ “No Shoes.” The sequence speaks volumes about its maker’s acerbic flair, as well as her willingness to film the seemingly mundane and otherwise unseen. As Rebecca, the mammogram technician, expresses later in the film, she has stopped viewing breasts as breasts, but rather as potential “tubes of terror.” Over the course of that initial, desensitizing volley of shots, we start viewing the breasts much like Rebecca does: not as sexual entities, but as biological and bodily ones. It is Holofcener’s combination of humor and stark realism that makes her vision of femininity so unique in contemporary American cinema. Her female characters are not the flawless goddesses we see so often in mainstream films. And though Holofcener is fascinated by what it means to be a woman in 21st-century America, she never approaches the question from a ceremonious or preachy position. We never see anyone in the Holofcener universe lecturing on the struggles and advancements of feminism. Her heroines are normal people. They’re two friends giggling over The Joy of Sex at a lake house. They’re sisters bonding over McDonald’s French fries. They’re divorced parents saying goodbye to their daughter as she leaves for college. They are the reason Holofcener’s films were and will continue to be important and relatable in a cinematic culture that breeds glibness and vapidity. They’re us. 18