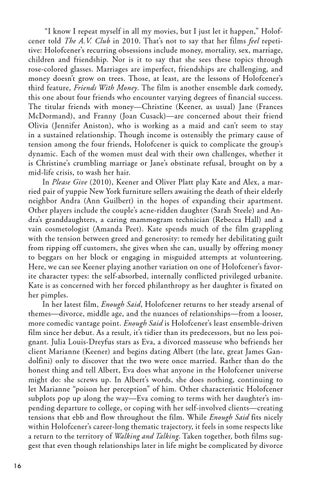 “I know I repeat myself in all my movies, but I just let it happen,” Holofcener told The A.V. Club in 2010. That’s not to say that her films feel repetitive: Holofcener’s recurring obsessions include money, mortality, sex, marriage, children and friendship. Nor is it to say that she sees these topics through rose-colored glasses. Marriages are imperfect, friendships are challenging, and money doesn’t grow on trees. Those, at least, are the lessons of Holofcener’s third feature, Friends With Money. The film is another ensemble dark comedy, this one about four friends who encounter varying degrees of financial success. The titular friends with money—Christine (Keener, as usual) Jane (Frances McDormand), and Franny (Joan Cusack)—are concerned about their friend Olivia (Jennifer Aniston), who is working as a maid and can’t seem to stay in a sustained relationship. Though income is ostensibly the primary cause of tension among the four friends, Holofcener is quick to complicate the group’s dynamic. Each of the women must deal with their own challenges, whether it is Christine’s crumbling marriage or Jane’s obstinate refusal, brought on by a mid-life crisis, to wash her hair. In Please Give (2010), Keener and Oliver Platt play Kate and Alex, a married pair of yuppie New York furniture sellers awaiting the death of their elderly neighbor Andra (Ann Guilbert) in the hopes of expanding their apartment. Other players include the couple’s acne-ridden daughter (Sarah Steele) and Andra’s granddaughters, a caring mammogram technician (Rebecca Hall) and a vain cosmetologist (Amanda Peet). Kate spends much of the film grappling with the tension between greed and generosity: to remedy her debilitating guilt from ripping off customers, she gives when she can, usually by offering money to beggars on her block or engaging in misguided attempts at volunteering. Here, we can see Keener playing another variation on one of Holofcener’s favorite character types: the self-absorbed, internally conflicted privileged urbanite. Kate is as concerned with her forced philanthropy as her daughter is fixated on her pimples. In her latest film, Enough Said, Holofcener returns to her steady arsenal of themes—divorce, middle age, and the nuances of relationships—from a looser, more comedic vantage point. Enough Said is Holofcener’s least ensemble-driven film since her debut. As a result, it’s tidier than its predecessors, but no less poignant. Julia Louis-Dreyfus stars as Eva, a divorced masseuse who befriends her client Marianne (Keener) and begins dating Albert (the late, great James Gandolfini) only to discover that the two were once married. Rather than do the honest thing and tell Albert, Eva does what anyone in the Holofcener universe might do: she screws up. In Albert’s words, she does nothing, continuing to let Marianne “poison her perception” of him. Other characteristic Holofcener subplots pop up along the way—Eva coming to terms with her daughter’s impending departure to college, or coping with her self-involved clients—creating tensions that ebb and flow throughout the film. While Enough Said fits nicely within Holofcener’s career-long thematic trajectory, it feels in some respects like a return to the territory of Walking and Talking. Taken together, both films suggest that even though relationships later in life might be complicated by divorce 16