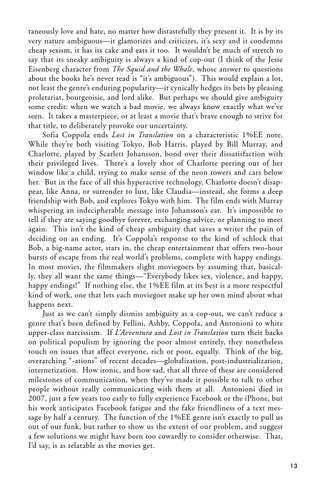 taneously love and hate, no matter how distastefully they present it. It is by its very nature ambiguous—it glamorizes and criticizes, it’s sexy and it condemns cheap sexism, it has its cake and eats it too. It wouldn’t be much of stretch to say that its sneaky ambiguity is always a kind of cop-out (I think of the Jesse Eisenberg character from The Squid and the Whale, whose answer to questions about the books he’s never read is “it’s ambiguous”). This would explain a lot, not least the genre’s enduring popularity—it cynically hedges its bets by pleasing proletariat, bourgeoisie, and lord alike. But perhaps we should give ambiguity some credit: when we watch a bad movie, we always know exactly what we’ve seen. It takes a masterpiece, or at least a movie that’s brave enough to strive for that title, to deliberately provoke our uncertainty. Sofia Coppola ends Lost in Translation on a characteristic 1%EE note. While they’re both visiting Tokyo, Bob Harris, played by Bill Murray, and Charlotte, played by Scarlett Johansson, bond over their dissatisfaction with their privileged lives. There’s a lovely shot of Charlotte peering out of her window like a child, trying to make sense of the neon towers and cars below her. But in the face of all this hyperactive technology, Charlotte doesn’t disappear, like Anna, or surrender to lust, like Claudia—instead, she forms a deep friendship with Bob, and explores Tokyo with him. The film ends with Murray whispering an indecipherable message into Johansson’s ear. It’s impossible to tell if they are saying goodbye forever, exchanging advice, or planning to meet again. This isn’t the kind of cheap ambiguity that saves a writer the pain of deciding on an ending. It’s Coppola’s response to the kind of schlock that Bob, a big-name actor, stars in, the cheap entertainment that offers two-hour bursts of escape from the real world’s problems, complete with happy endings. In most movies, the filmmakers slight moviegoers by assuming that, basically, they all want the same things—“Everybody likes sex, violence, and happy, happy endings!” If nothing else, the 1%EE film at its best is a more respectful kind of work, one that lets each moviegoer make up her own mind about what happens next. Just as we can’t simply dismiss ambiguity as a cop-out, we can’t reduce a genre that’s been defined by Fellini, Ashby, Coppola, and Antonioni to white upper-class narcissism. If L’Avventura and Lost in Translation turn their backs on political populism by ignoring the poor almost entirely, they nonetheless touch on issues that affect everyone, rich or poor, equally. Think of the big, overarching “-ations” of recent decades—globalization, post-industrialization, internetization. How ironic, and how sad, that all three of these are considered milestones of communication, when they’ve made it possible to talk to other people without really communicating with them at all. Antonioni died in 2007, just a few years too early to fully experience Facebook or the iPhone, but his work anticipates Facebook fatigue and the fake friendliness of a text message by half a century. The function of the 1%EE genre isn’t exactly to pull us out of our funk, but rather to show us the extent of our problem, and suggest a few solutions we might have been too cowardly to consider otherwise. That, I’d say, is as relatable as the movies get. 13