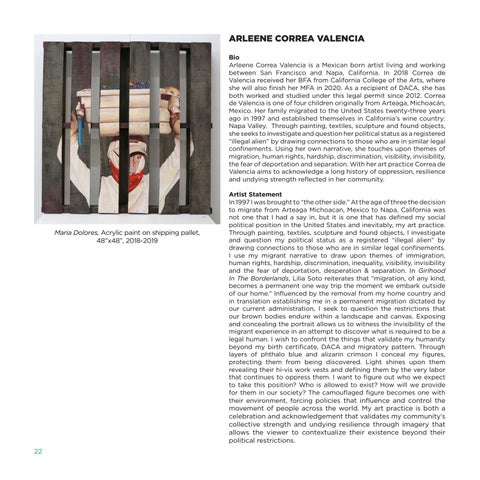 ARLEENE CORREA VALENCIA Bio Arleene Correa Valencia is a Mexican born artist living and working between San Francisco and Napa, California. In 2018 Correa de Valencia received her BFA from California College of the Arts, where she will also finish her MFA in 2020. As a recipient of DACA, she has both worked and studied under this legal permit since 2012. Correa de Valencia is one of four children originally from Arteaga, Michoacán, Mexico. Her family migrated to the United States twenty-three years ago in 1997 and established themselves in California’s wine country: Napa Valley. Through painting, textiles, sculpture and found objects, she seeks to investigate and question her political status as a registered “illegal alien” by drawing connections to those who are in similar legal confinements. Using her own narrative, she touches upon themes of migration, human rights, hardship, discrimination, visibility, invisibility, the fear of deportation and separation. With her art practice Correa de Valencia aims to acknowledge a long history of oppression, resilience and undying strength reflected in her community.

Artist Statement In 1997 I was brought to “the other side.” At the age of three the decision to migrate from Arteaga Michoacan, Mexico to Napa, California was not one that I had a say in, but it is one that has defined my social political position in the United States and inevitably, my art practice. Through painting, textiles, sculpture and found objects, I investigate and question my political status as a registered “illegal alien” by drawing connections to those who are in similar legal confinements. I use my migrant narrative to draw upon themes of immigration, human rights, hardship, discrimination, inequality, visibility, invisibility and the fear of deportation, desperation &amp; separation. In Girlhood In The Borderlands, Lilia Soto reiterates that “migration, of any kind, becomes a permanent one way trip the moment we embark outside of our home.” Influenced by the removal from my home country and in translation establishing me in a permanent migration dictated by our current administration, I seek to question the restrictions that our brown bodies endure within a landscape and canvas. Exposing and concealing the portrait allows us to witness the invisibility of the migrant experience in an attempt to discover what is required to be a legal human. I wish to confront the things that validate my humanity beyond my birth certificate, DACA and migratory pattern. Through layers of phthalo blue and alizarin crimson I conceal my figures, protecting them from being discovered. Light shines upon them revealing their hi-vis work vests and defining them by the very labor that continues to oppress them. I want to figure out who we expect to take this position? Who is allowed to exist? How will we provide for them in our society? The camouflaged figure becomes one with their environment, forcing policies that influence and control the

movement of people across the world. My art practice is both a celebration and acknowledgement that validates my community’s collective strength and undying resilience through imagery that allows the viewer to contextualize their existence beyond their political restrictions. 22 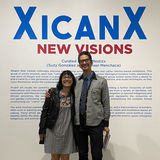