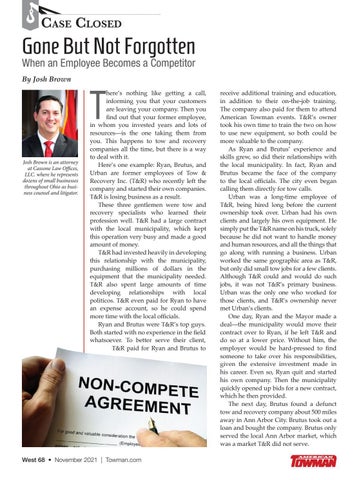 here’s nothing like getting a call, informing you that your customers are leaving your company. Then you find out that your former employee, in whom you invested years and lots of resources—is the one taking them from you. This happens to tow and recovery companies all the time, but there is a way to deal with it. Here’s one example: Ryan, Brutus, and Urban are former employees of Tow &amp; Recovery Inc. (T&amp;R) who recently left the company and started their own companies. T&amp;R is losing business as a result. These three gentlemen were tow and recovery specialists who learned their profession well. T&amp;R had a large contract with the local municipality, which kept this operation very busy and made a good amount of money. T&amp;R had invested heavily in developing this relationship with the municipality, purchasing millions of dollars in the equipment that the municipality needed. T&amp;R also spent large amounts of time developing relationships with local politicos. T&amp;R even paid for Ryan to have an expense account, so he could spend more time with the local officials. Ryan and Brutus were T&amp;R’s top guys. Both started with no experience in the field whatsoever. To better serve their client, T&amp;R paid for Ryan and Brutus to

receive additional training and education, in addition to their on-the-job training. The company also paid for them to attend American Towman events. T&amp;R’s owner took his own time to train the two on how to use new equipment, so both could be more valuable to the company. As Ryan and Brutus’ experience and skills grew, so did their relationships with the local municipality. In fact, Ryan and Brutus became the face of the company to the local officials. The city even began calling them directly for tow calls. Urban was a long-time employee of T&amp;R, being hired long before the current ownership took over. Urban had his own clients and largely his own equipment. He simply put the T&amp;R name on his truck, solely because he did not want to handle money and human resources, and all the things that go along with running a business. Urban worked the same geographic area as T&amp;R, but only did small tow jobs for a few clients. Although T&amp;R could and would do such jobs, it was not T&amp;R’s primary business. Urban was the only one who worked for those clients, and T&amp;R’s ownership never met Urban’s clients. One day, Ryan and the Mayor made a deal—the municipality would move their contract over to Ryan, if he left T&amp;R and do so at a lower price. Without him, the employer would be hard-pressed to find someone to take over his responsibilities, given the extensive investment made in his career. Even so, Ryan quit and started his own company. Then the municipality quickly opened up bids for a new contract, which he then provided. The next day, Brutus found a defunct tow and recovery company about 500 miles away in Ann Arbor City. Brutus took out a loan and bought the company. Brutus only served the local Ann Arbor market, which was a market T&amp;R did not serve.