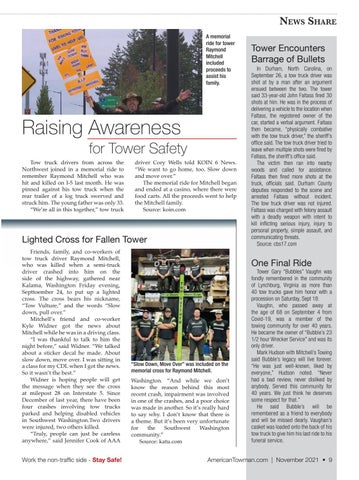 Tow truck drivers from across the Northwest joined in a memorial ride to remember Raymond Mitchell who was hit and killed on I-5 last month. He was pinned against his tow truck when the rear trailer of a log truck swerved and struck him. The young father was only 33. “We’re all in this together,” tow truck

driver Cory Wells told KOIN 6 News. “We want to go home, too. Slow down and move over.” The memorial ride for Mitchell began and ended at a casino, where there were food carts. All the proceeds went to help the Mitchell family. Source: koin.com

Lighted Cross for Fallen Tower Friends, family, and co-workers of tow truck driver Raymond Mitchell, who was killed when a semi-truck driver crashed into him on the side of the highway, gathered near Kalama, Washington Friday evening, Septtoember 24, to put up a lighted cross. The cross bears his nickname, “Tow Vulture,” and the words “Slow down, pull over.” Mitchell’s friend and co-worker Kyle Widner got the news about Mitchell while he was in a driving class. “I was thankful to talk to him the night before,” said Widner. “We talked about a sticker decal he made. About slow down, move over. I was sitting in a class for my CDL when I got the news. So it wasn’t the best.” Widner is hoping people will get the message when they see the cross at milepost 28 on Interstate 5. Since December of last year, there have been four crashes involving tow trucks parked and helping disabled vehicles in Southwest Washington.Two drivers were injured, two others killed. “Truly, people can just be careless anywhere,” said Jennifer Cook of AAA

In Durham, North Carolina, on September 26, a tow truck driver was shot at by a man after an argument ensued between the two. The tower said 33-year-old John Faltass fired 30 shots at him. He was in the process of delivering a vehicle to the location when Faltass, the registered owner of the car, started a verbal argument. Faltass then became, “physically combative with the tow truck driver,” the sheriff’s office said. The tow truck driver tried to leave when multiple shots were fired by Faltass, the sheriff’s office said. The victim then ran into nearby woods and called for assistance. Faltass then fired more shots at the truck, officials said. Durham County deputies responded to the scene and arrested Faltass without incident. The tow truck driver was not injured. Faltass was charged with felony assault with a deadly weapon with intent to kill inflicting serious injury, injury to personal property, simple assault, and communicating threats. Source: cbs17.com

“Slow Down, Move Over” was included on the memorial cross for Raymond Mitchell. Washington. “And while we don’t know the reason behind this most recent crash, impairment was involved in one of the crashes, and a poor choice was made in another. So it’s really hard to say why. I don’t know that there is a theme. But it’s been very unfortunate for the Southwest Washington community.” Source: katu.com

Tower Gary “Bubbles” Vaughn was fondly remembered in the community of Lynchburg, Virginia as more than 40 tow trucks gave him honor with a procession on Saturday, Sept 18. Vaughn, who passed away at the age of 68 on September 4 from Covid-19, was a member of the towing community for over 40 years. He became the owner of “Bubble’s 23 1/2 hour Wrecker Service” and was its only driver. Mark Hudson with Mitchell’s Towing said Bubble’s legacy will live forever. “He was just well-known, liked by everyone,” Hudson noted. “Never had a bad review, never disliked by anybody. Served this community for 40 years. We just think he deserves some respect for that.” He said Bubble’s will be remembered as a friend to everybody and will be missed dearly. Vaughan’s casket was loaded onto the back of his tow truck to give him his last ride to his funeral service.