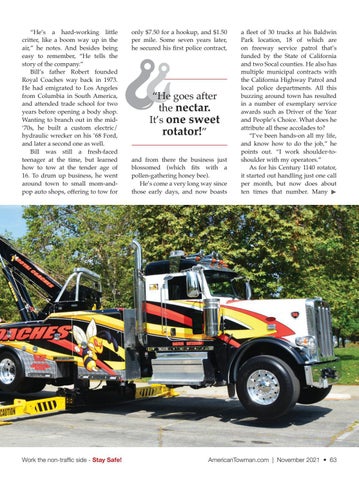 “He’s a hard-working little critter, like a boom way up in the air,” he notes. And besides being easy to remember, “He tells the story of the company.” Bill’s father Robert founded Royal Coaches way back in 1973. He had emigrated to Los Angeles from Columbia in South America, and attended trade school for two years before opening a body shop. Wanting to branch out in the mid‘70s, he built a custom electric/ hydraulic wrecker on his ’68 Ford, and later a second one as well. Bill was still a fresh-faced teenager at the time, but learned how to tow at the tender age of 16. To drum up business, he went around town to small mom-andpop auto shops, offering to tow for

“He goes after the nectar. It’s one sweet rotator!” and from there the business just blossomed (which fits with a pollen-gathering honey bee). He’s come a very long way since those early days, and now boasts

a fleet of 30 trucks at his Baldwin Park location, 18 of which are on freeway service patrol that’s funded by the State of California and two Socal counties. He also has multiple municipal contracts with the California Highway Patrol and local police departments. All this buzzing around town has resulted in a number of exemplary service awards such as Driver of the Year and People’s Choice. What does he attribute all these accolades to? “I’ve been hands-on all my life, and know how to do the job,” he points out. “I work shoulder-toshoulder with my operators.” As for his Century 1140 rotator, it started out handling just one call per month, but now does about ten times that number. Many