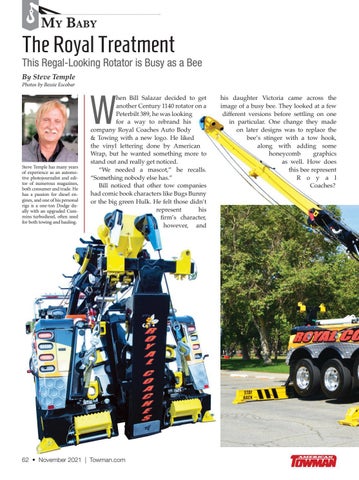 Steve Temple has many years of experience as an automotive photojournalist and editor of numerous magazines, both consumer and trade. He has a passion for diesel engines, and one of his personal rigs is a one-ton Dodge dually with an upgraded Cummins turbodiesel, often used for both towing and hauling.

hen Bill Salazar decided to get another Century 1140 rotator on a Peterbilt 389, he was looking for a way to rebrand his company Royal Coaches Auto Body &amp; Towing with a new logo. He liked the vinyl lettering done by American Wrap, but he wanted something more to stand out and really get noticed. “We needed a mascot,” he recalls. “Something nobody else has.” Bill noticed that other tow companies had comic book characters like Bugs Bunny or the big green Hulk. He felt those didn’t represent his firm’s character, however, and

his daughter Victoria came across the image of a busy bee. They looked at a few different versions before settling on one in particular. One change they made on later designs was to replace the bee’s stinger with a tow hook, along with adding some honeycomb graphics as well. How does this bee represent R o y a l Coaches?