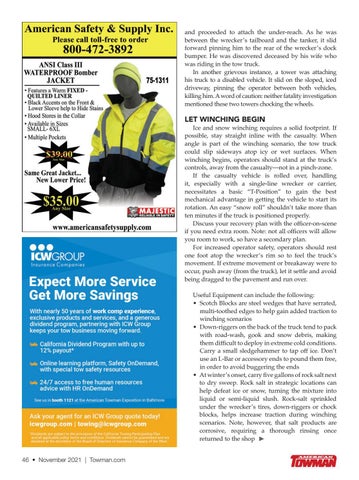 and proceeded to attach the under-reach. As he was between the wrecker’s tailboard and the tanker, it slid forward pinning him to the rear of the wrecker’s dock bumper. He was discovered deceased by his wife who was riding in the tow truck. In another grievous instance, a tower was attaching his truck to a disabled vehicle. It slid on the sloped, iced driveway, pinning the operator between both vehicles, killing him. A word of caution: neither fatality investigation mentioned these two towers chocking the wheels.

Ice and snow winching requires a solid footprint. If possible, stay straight inline with the casualty. When angle is part of the winching scenario, the tow truck could slip sideways atop icy or wet surfaces. When winching begins, operators should stand at the truck’s controls, away from the casualty—not in a pinch-zone. If the casualty vehicle is rolled over, handling it, especially with a single-line wrecker or carrier, necessitates a basic “T-Position” to gain the best mechanical advantage in getting the vehicle to start its rotation. An easy “snow roll” shouldn’t take more than ten minutes if the truck is positioned properly. Discuss your recovery plan with the officer-on-scene if you need extra room. Note: not all officers will allow you room to work, so have a secondary plan. For increased operator safety, operators should rest one foot atop the wrecker’s rim so to feel the truck’s movement. If extreme movement or breakaway were to occur, push away (from the truck), let it settle and avoid being dragged to the pavement and run over. Useful Equipment can include the following: •   Scotch Blocks are steel wedges that have serrated, multi-toothed edges to help gain added traction to winching scenarios •   Down-riggers on the back of the truck tend to pack with road-wash, gook and snow debris, making them difficult to deploy in extreme cold conditions. Carry a small sledgehammer to tap off ice. Don’t use an L-Bar or accessory ends to pound them free, in order to avoid buggering the ends •   At winter’s onset, carry five gallons of rock salt next to dry sweep. Rock salt in strategic locations can help defeat ice or snow, turning the mixture into liquid or semi-liquid slush. Rock-salt sprinkled under the wrecker’s tires, down-riggers or chock blocks, helps increase traction during winching scenarios. Note, however, that salt products are corrosive, requiring a thorough rinsing once returned to the shop