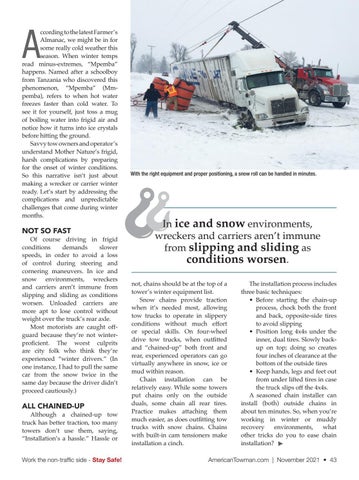 ccording to the latest Farmer’s Almanac, we might be in for some really cold weather this season. When winter temps read minus-extremes, “Mpemba” happens. Named after a schoolboy from Tanzania who discovered this phenomenon, “Mpemba” (Mmpemba), refers to when hot water freezes faster than cold water. To see it for yourself, just toss a mug of boiling water into frigid air and notice how it turns into ice crystals before hitting the ground. Savvy tow owners and operator’s understand Mother Nature’s frigid, harsh complications by preparing for the onset of winter conditions. So this narrative isn’t just about making a wrecker or carrier winter ready. Let’s start by addressing the complications and unpredictable challenges that come during winter months.

Of course driving in frigid conditions demands slower speeds, in order to avoid a loss of control during steering and cornering maneuvers. In ice and snow environments, wreckers and carriers aren’t immune from slipping and sliding as conditions worsen. Unloaded carriers are more apt to lose control without weight over the truck’s rear axle. Most motorists are caught offguard because they’re not winterproficient. The worst culprits are city folk who think they’re experienced “winter drivers.” (In one instance, I had to pull the same car from the snow twice in the same day because the driver didn’t proceed cautiously.)

Although a chained-up tow truck has better traction, too many towers don’t use them, saying, “Installation’s a hassle.” Hassle or Work the non-traffic side - Stay Safe!

With the right equipment and proper positioning, a snow roll can be handled in minutes.

In ice and snow environments, wreckers and carriers aren’t immune from slipping and sliding as conditions worsen. not, chains should be at the top of a tower’s winter equipment list. Snow chains provide traction when it’s needed most, allowing tow trucks to operate in slippery conditions without much effort or special skills. On four-wheel drive tow trucks, when outfitted and “chained-up” both front and rear, experienced operators can go virtually anywhere in snow, ice or mud within reason. Chain installation can be relatively easy. While some towers put chains only on the outside duals, some chain all rear tires. Practice makes attaching them much easier, as does outfitting tow trucks with snow chains. Chains with built-in cam tensioners make installation a cinch.

The installation process includes three basic techniques: •   Before starting the chain-up process, chock both the front and back, opposite-side tires to avoid slipping •   Position long 4x4s under the inner, dual tires. Slowly backup on top; doing so creates four inches of clearance at the bottom of the outside tires •   Keep hands, legs and feet out from under lifted tires in case the truck slips off the 4x4s. A seasoned chain installer can install (both) outside chains in about ten minutes. So, when you’re working in winter or muddy recovery environments, what other tricks do you to ease chain installation?