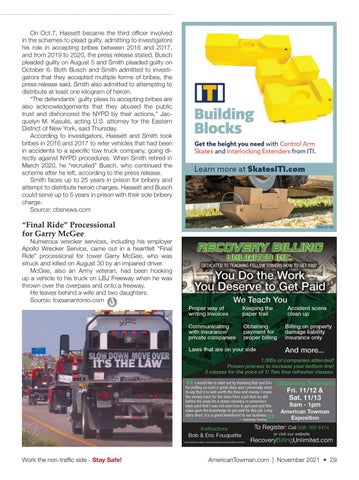 On Oct.7, Hassett became the third officer involved in the schemes to plead guilty, admitting to investigators his role in accepting bribes between 2016 and 2017, and from 2019 to 2020, the press release stated. Busch pleaded guilty on August 5 and Smith pleaded guilty on October 6. Both Busch and Smith admitted to investigators that they accepted multiple forms of bribes, the press release said. Smith also admitted to attempting to distribute at least one kilogram of heroin. “The defendants’ guilty pleas to accepting bribes are also acknowledgements that they abused the public trust and dishonored the NYPD by their actions,” Jacquelyn M. Kasulis, acting U.S. attorney for the Eastern District of New York, said Thursday. According to investigators, Hassett and Smith took bribes in 2016 and 2017 to refer vehicles that had been in accidents to a specific tow truck company, going directly against NYPD procedures. When Smith retired in March 2020, he “recruited” Busch, who continued the scheme after he left, according to the press release. Smith faces up to 25 years in prison for bribery and attempt to distribute heroin charges. Hassett and Busch could serve up to 5 years in prison with their sole bribery charge. Source: cbsnews.com

Numerous wrecker services, including his employer Apollo Wrecker Service, came out in a heartfelt “Final Ride” processional for tower Garry McGee, who was struck and killed on August 30 by an impaired driver. McGee, also an Army veteran, had been hooking up a vehicle to his truck on LBJ Freeway when he was thrown over the overpass and onto a freeway. He leaves behind a wife and two daughters. Source: foxsanantonio.com