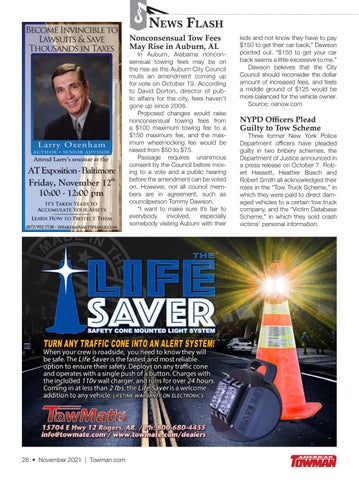 In Auburn, Alabama nonconsensual towing fees may be on the rise as the Auburn City Council mulls an amendment coming up for vote on October 19. According to David Dorton, director of public affairs for the city, fees haven’t gone up since 2008. Proposed changes would raise nonconsensual towing fees from a $100 maximum towing fee to a $150 maximum fee, and the maximum wheel-locking fee would be raised from $50 to $75. Passage requires unanimous consent by the Council before moving to a vote and a public hearing before the amendment can be voted on. However, not all council members are in agreement, such as councilperson Tommy Dawson. “I want to make sure it’s fair to everybody involved, especially somebody visiting Auburn with their

kids and not know they have to pay $150 to get their car back,” Dawson pointed out. “$150 to get your car back seems a little excessive to me.” Dawson believes that the City Council should reconsider the dollar amount of increased fees, and feels a middle ground of $125 would be more balanced for the vehicle owner. Source: oanow.com

Three former New York Police Department officers have pleaded guilty in two bribery schemes, the Department of Justice announced in a press release on October 7. Robert Hassett, Heather Busch and Robert Smith all acknowledged their roles in the “Tow Truck Scheme,” in which they were paid to direct damaged vehicles to a certain tow truck company, and the “Victim Database Scheme,” in which they sold crash victims’ personal information.