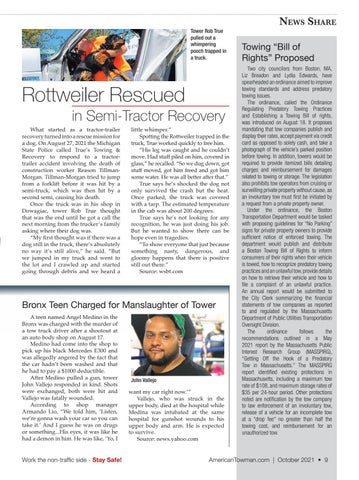 Tower Rob True pulled out a whimpering pooch trapped in a truck.

What started as a tractor-trailer recovery turned into a rescue mission for a dog. On August 27, 2021 the Michigan State Police called True’s Towing & Recovery to respond to  a  tractortrailer accident involving the death of construction worker Reason TillmanMorgan. Tillman-Morgan tried to jump from a forklift before it was hit by a semi-truck, which was then hit by a second semi, causing his death. Once the truck was in his shop in Dowagiac, tower Rob True thought that was the end until he got a call the next morning from the trucker’s family asking where their dog was. “My first thought was if there was a dog still in the truck, there’s absolutely no way it’s still alive,” he said. “But we jumped in my truck and went to the lot and I crawled up and started going through debris and we heard a

little whimper.” Spotting the Rottweiler trapped in the truck, True worked quickly to free him. “His leg was caught and he couldn’t move. Had stuff piled on him, covered in glass,” he recalled. “So we dug down, got stuff moved, got him freed and got him some water. He was all better after that.” True says he’s shocked the dog not only survived the crash but the heat. Once parked, the truck was covered with a tarp. The estimated temperature in the cab was about 200 degrees. True says he’s not looking for any recognition, he was just doing his job. But he wanted to show there can be hope even in tragedies. “To show everyone that just because something nasty, dangerous, and gloomy happens that there is positive still out there.” Source: wsbt.com

Bronx Teen Charged for Manslaughter of Tower A teen named Angel Medino in the Bronx was charged with the murder of a tow truck driver after a shootout at an auto body shop on August 17. Medino had come into the shop to pick up his black Mercedes E300 and was allegedly angered by the fact that the car hadn’t been washed and that he had to pay a $1000 deductible. After Medino pulled a gun, tower John Vallejo responded in kind. Shots were exchanged, both were hit and Vallejo was fatally wounded. According to shop manager Armando Lio, “We told him, ‘Listen, we’re gonna wash your car so you can take it.’ And I guess he was on drugs or something...His eyes, it was like he had a demon in him. He was like, ‘Yo, I

John Vallejo want my car right now.’” Vallejo, who was struck in the upper body, died at the hospital while Medina was intubated at the same hospital for gunshot wounds to his upper body and arm. He is expected to survive. Source: news.yahoo.com

Two city councilors from Boston, MA, Liz Breadon and Lydia Edwards, have spearheaded an ordinance aimed to improve towing standards and address predatory towing issues. The ordinance, called the Ordinance Regulating Predatory Towing Practices and Establishing a Towing Bill of rights, was introduced on August 18. It proposes mandating that tow companies publish and display their rates, accept payment via credit card as opposed to solely cash, and take a photograph of the vehicle’s parked position before towing. In addition, towers would be required to provide itemized bills detailing charges and reimbursement for damages related to towing or storage. The legislation also prohibits tow operators from cruising or surveilling private property without cause, as an involuntary tow must first be initiated by a request from a private property owner. Under the ordinance, the Boston Transportation Department would be tasked with proposing guidelines for “No Parking” signs for private property owners to provide sufficient notice of enforced towing. The department would publish and distribute a Boston Towing Bill of Rights to inform consumers of their rights when their vehicle is towed, how to recognize predatory towing practices and an unlawful tow, provide details on how to retrieve their vehicle and how to file a complaint of an unlawful practice. An annual report would be submitted to the City Clerk summarizing the financial statements of tow companies as reported to and regulated by the Massachusetts Department of Public Utilities Transportation Oversight Division. The ordinance follows the recommendations outlined in a May 2021 report by the Massachusetts Public Interest Research Group (MASSPIRG), “Getting Off the Hook of a Predatory Tow in Massachusetts.” The MASSPIRG report identified existing protections in Massachusetts, including a maximum tow rate of $108, and maximum storage rates of $35 per 24-hour period. Other protections noted are notification by the tow company to law enforcement of an involuntary tow, release of a vehicle for an incomplete tow at a “drop fee” no greater than half the towing cost, and reimbursement for an unauthorized tow.