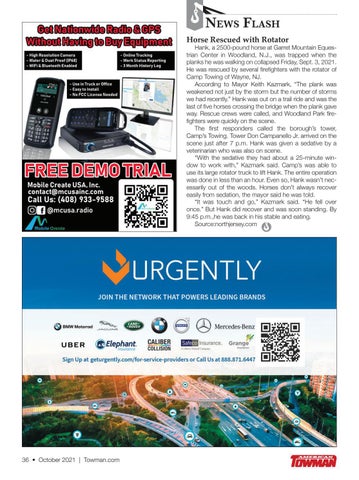 Hank, a 2500-pound horse at Garret Mountain Equestrian Center in Woodland, N.J., was trapped when the planks he was walking on collapsed Friday, Sept. 3, 2021. He was rescued by several firefighters with the rotator of Camp Towing of Wayne, NJ. According to Mayor Keith Kazmark, “The plank was weakened not just by the storm but the number of storms we had recently.” Hank was out on a trail ride and was the last of five horses crossing the bridge when the plank gave way. Rescue crews were called, and Woodland Park firefighters were quickly on the scene. The first responders called the borough’s tower, Camp’s Towing. Tower Don Campanello Jr. arrived on the scene just after 7 p.m. Hank was given a sedative by a veterinarian who was also on scene. “With the sedative they had about a 25-minute window to work with,” Kazmark said. Camp’s was able to use its large rotator truck to lift Hank. The entire operation was done in less than an hour. Even so, Hank wasn’t necessarily out of the woods. Horses don’t always recover easily from sedation, the mayor said he was told. “It was touch and go,” Kazmark said. “He fell over once.” But Hank did recover and was soon standing. By 9:45 p.m.,he was back in his stable and eating. Source:northjersey.com