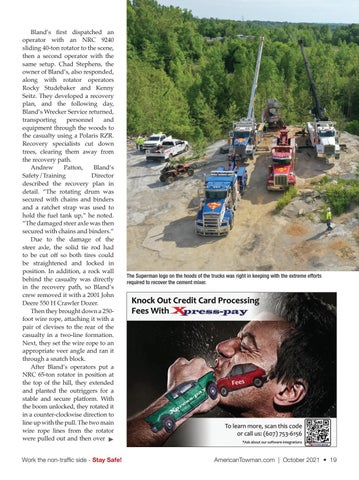 Bland’s first dispatched an operator with an NRC 9240 sliding 40-ton rotator to the scene, then a second operator with the same setup. Chad Stephens, the owner of Bland’s, also responded, along with rotator operators Rocky Studebaker and Kenny Seitz. They developed a recovery plan, and the following day, Bland’s Wrecker Service returned, transporting personnel and equipment through the woods to the casualty using a Polaris RZR. Recovery specialists cut down trees, clearing them away from the recovery path.  Andrew Patton, Bland’s Safety/Training Director described the recovery plan in detail. “The rotating drum was secured with chains and binders and a ratchet strap was used to hold the fuel tank up,” he noted. “The damaged steer axle was then secured with chains and binders.” Due to the damage of the steer axle, the solid tie rod had to be cut off so both tires could be straightened and locked in position. In addition, a rock wall behind the casualty was directly in the recovery path, so Bland’s crew removed it with a 2001 John Deere 550 H Crawler Dozer.  Then they brought down a 250foot wire rope, attaching it with a pair of clevises to the rear of the casualty in a two-line formation. Next, they set the wire rope to an appropriate veer angle and ran it through a snatch block. After Bland’s operators put a NRC 65-ton  rotator in position at the top of the hill, they extended and planted the outriggers for a stable and secure platform. With the boom unlocked, they rotated it in a counter-clockwise direction to line up with the pull. The two main wire rope lines from the rotator were pulled out and then over

The Superman logo on the hoods of the trucks was right in keeping with the extreme efforts required to recover the cement mixer.