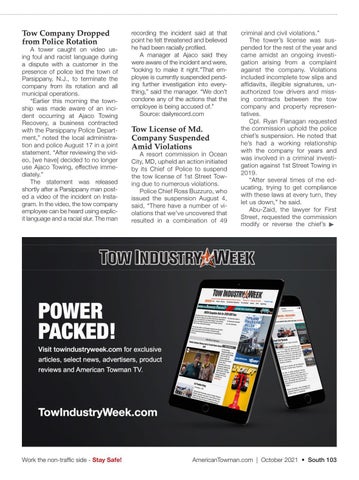 A tower caught on video using foul and racist language during a dispute with a customer in the presence of police led the town of Parsippany, N.J., to terminate the company from its rotation and all municipal operations. “Earlier this morning the township was made aware of an incident occurring at Ajaco Towing Recovery, a business contracted with the Parsippany Police Department,” noted the local administration and police August 17 in a joint statement. “After reviewing the video, [we have] decided to no longer use Ajaco Towing, effective immediately.” The statement was released shortly after a Parsippany man posted a video of the incident on Instagram. In the video, the tow company employee can be heard using explicit language and a racial slur. The man

recording the incident said at that point he felt threatened and believed he had been racially profiled. A manager at Ajaco said they were aware of the incident and were, “looking to make it right.”That employee is currently suspended pending further investigation into everything,” said the manager. “We don’t condone any of the actions that the employee is being accused of.” Source: dailyrecord.com

A resort commission in Ocean City, MD, upheld an action initiated by its Chief of Police to suspend the tow license of 1st Street Towing due to numerous violations. Police Chief Ross Buzzuro, who issued the suspension August 4, said, “There have a number of violations that we’ve uncovered that resulted in a combination of 49

criminal and civil violations.” The tower’s license was suspended for the rest of the year and came amidst an ongoing investigation arising from a complaint against the company. Violations included incomplete tow slips and affidavits, illegible signatures, unauthorized tow drivers and missing contracts between the tow company and property representatives. Cpl. Ryan Flanagan requested the commission uphold the police chief’s suspension. He noted that he’s had a working relationship with the company for years and was involved in a criminal investigation against 1st Street Towing in 2019. “After several times of me educating, trying to get compliance with these laws at every turn, they let us down,” he said. Abu-Zaid, the lawyer for First Street, requested the commission modify or reverse the chief’s