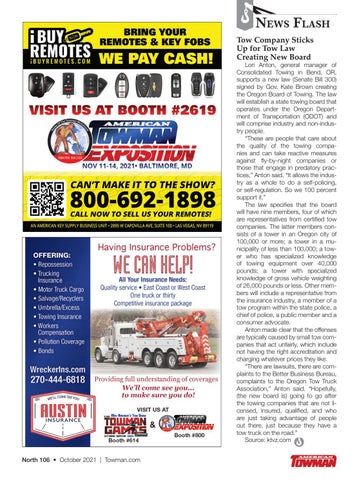 Lori Anton, general manager of Consolidated Towing in Bend, OR, supports a new law (Senate Bill 300) signed by Gov. Kate Brown creating the Oregon Board of Towing. The law will establish a state towing board that operates under the Oregon Department of Transportation (ODOT) and will comprise industry and non-industry people. “These are people that care about the quality of the towing companies and can take reactive measures against fly-by-night companies or those that engage in predatory practices,” Anton said. “It allows the industry as a whole to do a self-policing, or self-regulation. So we 100 percent support it.” The law specifies that the board will have nine members, four of which are representatives from certified tow companies. The latter members consists of a tower in an Oregon city of 100,000 or more; a tower in a municipality of less than 100,000; a tower who has specialized knowledge of towing equipment over 40,000 pounds; a tower with specialized knowledge of gross vehicle weighting of 26,000 pounds or less. Other members will include a representative from the insurance industry, a member of a tow program within the state police, a chief of police, a public member and a consumer advocate. Anton made clear that the offenses are typically caused by small tow companies that act unfairly, which include not having the right accreditation and charging whatever prices they like. “There are lawsuits, there are complaints to the Better Business Bureau, complaints to the Oregon Tow Truck Association,” Anton said. “Hopefully, (the new board is) going to go after the towing companies that are not licensed, insured, qualified, and who are just taking advantage of people out there, just because they have a tow truck on the road.” Source: ktvz.com North 106 • October 2021 | Towman.com