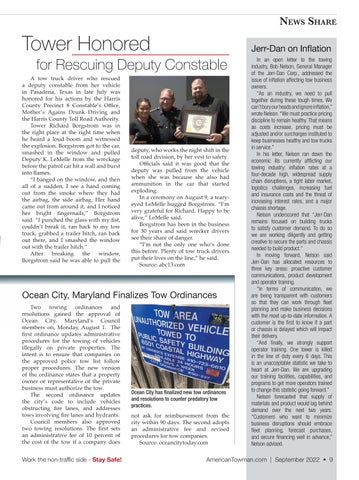 A tow truck driver who rescued a deputy constable from her vehicle in Pasadena, Texas in late July was honored for his actions by the Harris County Precinct 8 Constable’s Office, Mother’s Agains Drunk Driving and the Harris County Toll Road Authority. Tower Richard Borgstrom was in the right place at the right time when he heard a loud boom and witnessed the explosion. Borgstrom got to the car, smashed in the window and pulled Deputy K. LeMelle from the wreckage before the patrol car hit a wall and burst into flames. “I banged on the window, and then all of a sudden, I see a hand coming out from the smoke where they had the airbag, the side airbag. Her hand came out from around it, and I noticed her bright fingernails,” Borgstrom said. “I punched the glass with my fist, couldn’t break it, ran back to my tow truck, grabbed a trailer hitch, ran back out there, and I smashed the window out with the trailer hitch.” After breaking the window, Borgstrom said he was able to pull the

deputy, who works the night shift in the toll road division, by her vest to safety. Officials said it was good that the deputy was pulled from the vehicle when she was because she also had ammunition in the car that started exploding. In a ceremony on August 9, a tearyeyed LeMelle hugged Borgstrom. “I’m very grateful for Richard. Happy to be alive,” LeMelle said. Borgstrom has been in the business for 30 years and said wrecker drivers see their share of danger. “I’m not the only one who’s done this before. Plenty of tow truck drivers put their lives on the line,” he said. Source: abc13.com

Ocean City, Maryland Finalizes Tow Ordinances Two towing ordinances and resolutions gained the approval of Ocean City, Maryland’s Council members on, Monday, August 1. The first ordinance updates administrative procedures for the towing of vehicles illegally on private properties. The intent is to ensure that companies on the approved police tow list follow proper procedures. The new version of the ordinance states that a property owner or representative of the private business must authorize the tow. The second ordinance updates the city’s code to include vehicles obstructing fire lanes, and addresses tows involving fire lanes and hydrants. Council members also approved two towing resolutions. The first sets an administrative fee of 10 percent of the cost of the tow if a company does

Ocean City has finalized new tow ordinances and resolutions to counter predatory tow practices. not ask for reimbursement from the city within 90 days. The second adopts an administrative fee and revised procedures for tow companies. Source: oceancitytoday.com

Jerr-Dan on Inflation In an open letter to the towing industry, Bob Nelson, General Manager of the Jerr-Dan Corp., addressed the issue of inflation affecting tow business owners. “As an industry, we need to pull together during these tough times. We can’t bury our heads and ignore inflation,” wrote Nelson. “We must practice pricing discipline to remain healthy. That means as costs increase, pricing must be adjusted and/or surcharges instituted to keep businesses healthy and tow trucks in service.” In his letter, Nelson ran down the economic ills currently afflicting our towing industry: inflation rates at a four-decade high, widespread supply chain disruptions, a tight labor market, logistics challenges, increasing fuel and insurance costs and the threat of increasing interest rates, and a major chassis shortage. Nelson underscored that “Jerr-Dan remains focused on building trucks to satisfy customer demand. To do so we are working diligently and getting creative to secure the parts and chassis needed to build product.” In moving forward, Nelson said Jerr-Dan has allocated resources to three key areas: proactive customer communications, product development and operator training. “In terms of communication, we are being transparent with customers so that they can work through fleet planning and make business decisions with the most up-to-date information. A customer is the first to know if a part or chassis is delayed which will impact their delivery. “And finally, we strongly support operator training. One tower is killed in the line of duty every 6 days. This is an unacceptable statistic we take to heart at Jerr-Dan. We are upgrading our training facilities, capabilities, and programs to get more operators trained to change this statistic going forward.” Nelson forecasted that supply of materials and product would lag behind demand over the next two years. “Customers who want to minimize business disruptions should embrace fleet planning, forecast purchases, and secure financing well in advance,” Nelson advised.