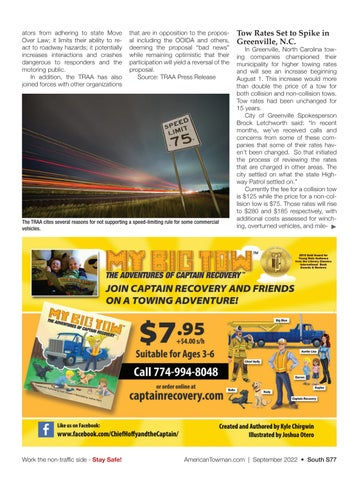 ators from adhering to state Move Over Law; it limits their ability to react to roadway hazards; it potentially increases interactions and crashes dangerous to responders and the motoring public. In addition, the TRAA has also joined forces with other organizations

that are in opposition to the proposal including the OOIDA and others, deeming the proposal “bad news” while remaining optimistic that their participation will yield a reversal of the proposal. Source: TRAA Press Release

The TRAA cites several reasons for not supporting a speed-limiting rule for some commercial vehicles.

In Greenville, North Carolina towing companies championed their municipality for higher towing rates and will see an increase beginning August 1. This increase would more than double the price of a tow for both collision and non-collision tows. Tow rates had been unchanged for 15 years. City of Greenville Spokesperson Brock Letchworth said: “In recent months, we’ve received calls and concerns from some of these companies that some of their rates haven’t been changed. So that initiated the process of reviewing the rates that are charged in other areas. The city settled on what the state Highway Patrol settled on.” Currently the fee for a collision tow is $125 while the price for a non-collision tow is $75. Those rates will rise to $280 and $185 respectively, with additional costs assessed for winching, overturned vehicles, and mile-