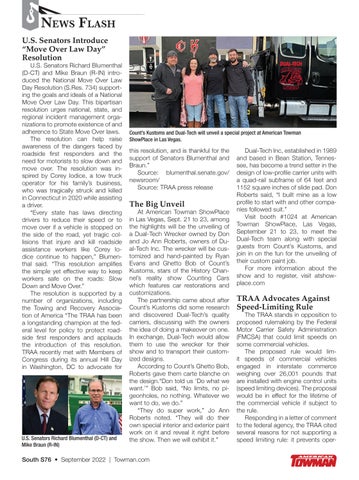 U.S. Senators Richard Blumenthal (D-CT) and Mike Braun (R-IN) introduced the National Move Over Law Day Resolution (S.Res. 734) supporting the goals and ideals of a National Move Over Law Day. This bipartisan resolution urges national, state, and regional incident management organizations to promote existence of and adherence to State Move Over laws. The resolution can help raise awareness of the dangers faced by roadside first responders and the need for motorists to slow down and move over. The resolution was inspired by Corey Iodice, a tow truck operator for his family’s business, who was tragically struck and killed in Connecticut in 2020 while assisting a driver. “Every state has laws directing drivers to reduce their speed or to move over if a vehicle is stopped on the side of the road, yet tragic collisions that injure and kill roadside assistance workers like Corey Iodice continue to happen,” Blumenthal said. “This resolution amplifies the simple yet effective way to keep workers safe on the roads: Slow Down and Move Over.” The resolution is supported by a number of organizations, including the Towing and Recovery Association of America “The TRAA has been a longstanding champion at the federal level for policy to protect roadside first responders and applauds the introduction of this resolution. TRAA recently met with Members of Congress during its annual Hill Day in Washington, DC to advocate for

Count’s Kustoms and Dual-Tech will unveil a special project at American Towman ShowPlace in Las Vegas.

this resolution, and is thankful for the support of Senators Blumenthal and Braun.” Source: blumenthal.senate.gov/ newsroom/ Source: TRAA press release

At American Towman ShowPlace in Las Vegas, Sept. 21 to 23, among the highlights will be the unveiling of a Dual-Tech Wrecker owned by Don and Jo Ann Roberts, owners of Dual-Tech Inc. The wrecker will be customized and hand-painted by Ryan Evans and Ghetto Bob of Count’s Kustoms, stars of the History Channel’s reality show Counting Cars which features car restorations and customizations. The partnership came about after Count’s Kustoms did some research and discovered Dual-Tech’s quality carriers, discussing with the owners the idea of doing a makeover on one. In exchange, Dual-Tech would allow them to use the wrecker for their show and to transport their customized designs. According to Count’s Ghetto Bob, Roberts gave them carte blanche on the design.“Don told us ‘Do what we want.’” Bob said, “No limits, no pigeonholes, no nothing. Whatever we want to do, we do.” “They do super work,” Jo Ann Roberts noted. “They will do their own special interior and exterior paint work on it and reveal it right before the show. Then we will exhibit it.”

Dual-Tech Inc, established in 1989 and based in Bean Station, Tennessee, has become a trend setter in the design of low-profile carrier units with a quad-rail subframe of 64 feet and 1152 square inches of slide pad. Don Roberts said, “I built mine as a low profile to start with and other companies followed suit.” Visit booth #1024 at American Towman ShowPlace, Las Vegas, September 21 to 23, to meet the Dual-Tech team along with special guests from Count’s Kustoms, and join in on the fun for the unveiling of their custom paint job. For more information about the show and to register, visit atshowplace.com

The TRAA stands in opposition to proposed rulemaking by the Federal Motor Carrier Safety Administration (FMCSA) that could limit speeds on some commercial vehicles. The proposed rule would limit speeds of commercial vehicles engaged in interstate commerce weighing over 26,001 pounds that are installed with engine control units (speed limiting devices). The proposal would be in effect for the lifetime of the commercial vehicle if subject to the rule. Responding in a letter of comment to the federal agency, the TRAA cited several reasons for not supporting a speed limiting rule: it prevents oper-