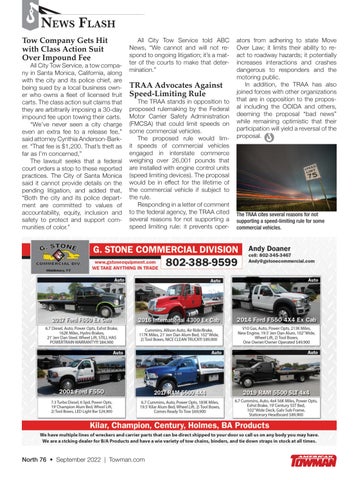 All City Tow Service, a tow company in Santa Monica, California, along with the city and its police chief, are being sued by a local business owner who owns a fleet of licensed fruit carts. The class action suit claims that they are arbitrarily imposing a 30-day impound fee upon towing their carts. “We’ve never seen a city charge even an extra fee to a release fee,” said attorney Cynthia Anderson-Barker. “That fee is $1,200. That’s theft as far as I’m concerned,” The lawsuit seeks that a federal court orders a stop to these reported practices. The City of Santa Monica said it cannot provide details on the pending litigation, and added that, “Both the city and its police department are committed to values of accountability, equity, inclusion and safety to protect and support communities of color.”

All City Tow Service told ABC News, “We cannot and will not respond to ongoing litigation; it’s a matter of the courts to make that determination.”

The TRAA stands in opposition to proposed rulemaking by the Federal Motor Carrier Safety Administration (FMCSA) that could limit speeds on some commercial vehicles. The proposed rule would limit speeds of commercial vehicles engaged in interstate commerce weighing over 26,001 pounds that are installed with engine control units (speed limiting devices). The proposal would be in effect for the lifetime of the commercial vehicle if subject to the rule. Responding in a letter of comment to the federal agency, the TRAA cited several reasons for not supporting a speed limiting rule: it prevents oper-

ators from adhering to state Move Over Law; it limits their ability to react to roadway hazards; it potentially increases interactions and crashes dangerous to responders and the motoring public. In addition, the TRAA has also joined forces with other organizations that are in opposition to the proposal including the OOIDA and others, deeming the proposal “bad news” while remaining optimistic that their participation will yield a reversal of the proposal.

The TRAA cites several reasons for not supporting a speed-limiting rule for some commercial vehicles.