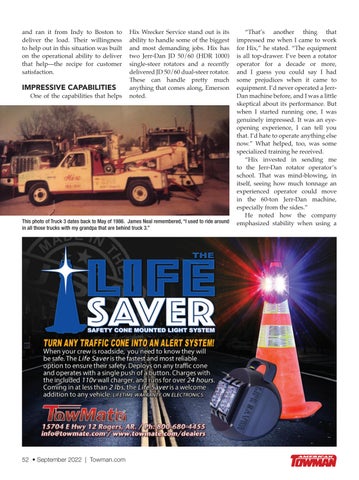 and ran it from Indy to Boston to deliver the load. Their willingness to help out in this situation was built on the operational ability to deliver that help—the recipe for customer satisfaction.

One of the capabilities that helps

Hix Wrecker Service stand out is its ability to handle some of the biggest and most demanding jobs. Hix has two Jerr-Dan JD 50/60 (HDR 1000) single-steer rotators and a recently delivered JD 50/60 dual-steer rotator. These can handle pretty much anything that comes along, Emerson noted.

This photo of Truck 3 dates back to May of 1986. James Neal remembered, “I used to ride around in all those trucks with my grandpa that are behind truck 3.”

“That’s another thing that impressed me when I came to work for Hix,” he stated. “The equipment is all top-drawer. I’ve been a rotator operator for a decade or more, and I guess you could say I had some prejudices when it came to equipment. I’d never operated a JerrDan machine before, and I was a little skeptical about its performance. But when I started running one, I was genuinely impressed. It was an eyeopening experience, I can tell you that. I’d hate to operate anything else now.” What helped, too, was some specialized training he received. “Hix invested in sending me to the Jerr-Dan rotator operator’s school. That was mind-blowing, in itself, seeing how much tonnage an experienced operator could move in the 60-ton Jerr-Dan machine, especially from the sides.” He noted how the company emphasized stability when using a