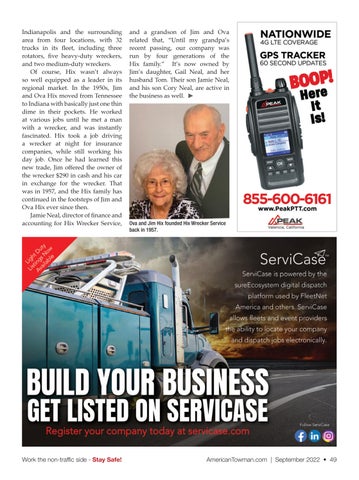 Indianapolis and the surrounding area from four locations, with 32 trucks in its fleet, including three rotators, five heavy-duty wreckers, and two medium-duty wreckers. Of course, Hix wasn’t always so well equipped as a leader in its regional market. In the 1950s, Jim and Ova Hix moved from Tennessee to Indiana with basically just one thin dime in their pockets. He worked at various jobs until he met a man with a wrecker, and was instantly fascinated. Hix took a job driving a wrecker at night for insurance companies, while still working his day job. Once he had learned this new trade, Jim offered the owner of the wrecker $290 in cash and his car in exchange for the wrecker. That was in 1957, and the Hix family has continued in the footsteps of Jim and Ova Hix ever since then. Jamie Neal, director of finance and accounting for Hix Wrecker Service,

and a grandson of Jim and Ova related that, “Until my grandpa’s recent passing, our company was run by four generations of the Hix family.” It’s now owned by Jim’s daughter, Gail Neal, and her husband Tom. Their son Jamie Neal, and his son Cory Neal, are active in the business as well.

Ova and Jim Hix founded Hix Wrecker Service back in 1957.