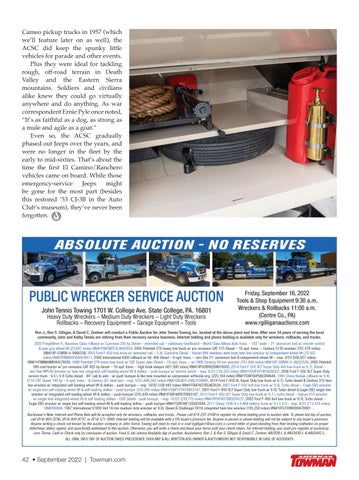 Cameo pickup trucks in 1957 (which we’ll feature later on as well), the ACSC did keep the spunky little vehicles for parade and other events. Plus they were ideal for tackling rough, off-road terrain in Death Valley and the Eastern Sierra mountains. Soldiers and civilians alike knew they could go virtually anywhere and do anything. As war correspondent Ernie Pyle once noted, “It’s as faithful as a dog, as strong as a mule and agile as a goat.” Even so, the ACSC gradually phased out Jeeps over the years, and were no longer in the fleet by the early to mid-sixties. That’s about the time the first El Camino/Ranchero vehicles came on board. While those emergency-service Jeeps might be gone for the most part (besides this restored ’53 CJ-3B in the Auto Club’s museum), they’ve never been forgotten.