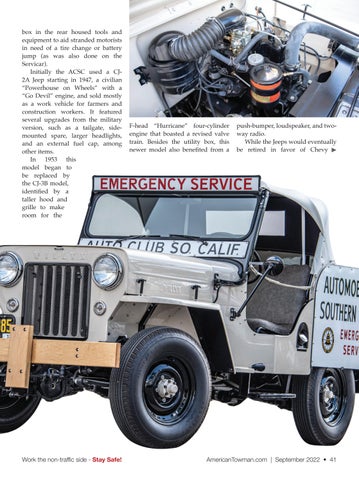 box in the rear housed tools and equipment to aid stranded motorists in need of a tire change or battery jump (as was also done on the Servicar). Initially the ACSC used a CJ2A Jeep starting in 1947, a civilian “Powerhouse on Wheels” with a “Go Devil” engine, and sold mostly as a work vehicle for farmers and construction workers. It featured several upgrades from the military version, such as a tailgate, sidemounted spare, larger headlights, and an external fuel cap, among other items. In 1953 this model began to be replaced by the CJ-3B model, identified by a taller hood and grille to make room for the

F-head “Hurricane” four-cylinder engine that boasted a revised valve train. Besides the utility box, this newer model also benefited from a

push-bumper, loudspeaker, and twoway radio. While the Jeeps would eventually be retired in favor of Chevy