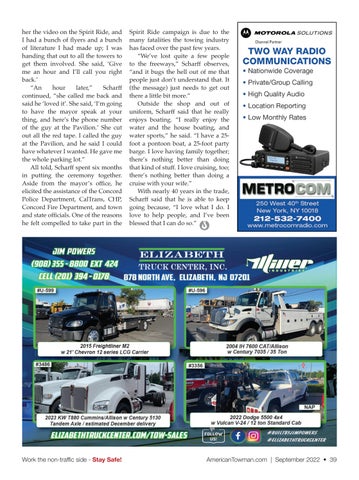 her the video on the Spirit Ride, and I had a bunch of flyers and a bunch of literature I had made up; I was handing that out to all the towers to get them involved. She said, ‘Give me an hour and I’ll call you right back.’ “An hour later,” Scharff continued, “she called me back and said he ‘loved it’. She said, ‘I’m going to have the mayor speak at your thing, and here’s the phone number of the guy at the Pavilion.’ She cut out all the red tape. I called the guy at the Pavilion, and he said I could have whatever I wanted. He gave me the whole parking lot.” All told, Scharff spent six months in putting the ceremony together. Aside from the mayor’s office, he elicited the assistance of the Concord Police Department, CalTrans, CHP, Concord Fire Department, and town and state officials. One of the reasons he felt compelled to take part in the

Spirit Ride campaign is due to the many fatalities the towing industry has faced over the past few years. “We’ve lost quite a few people to the freeways,” Scharff observes, “and it bugs the hell out of me that people just don’t understand that. It (the message) just needs to get out there a little bit more.” Outside the shop and out of uniform, Scharff said that he really enjoys boating. “I really enjoy the water and the house boating, and water sports,” he said. “I have a 25foot a pontoon boat, a 25-foot party barge. I love having family together; there’s nothing better than doing that kind of stuff. I love cruising, too; there’s nothing better than doing a cruise with your wife.” With nearly 40 years in the trade, Scharff said that he is able to keep going because, “I love what I do. I love to help people, and I’ve been blessed that I can do so.”