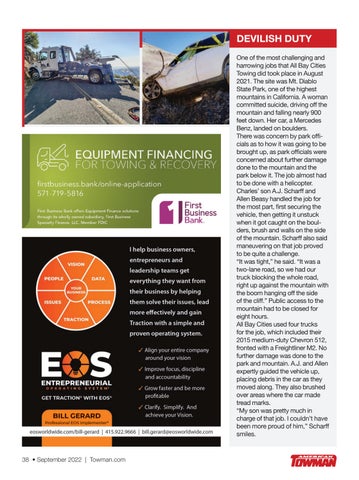 DEVILISH DUTY One of the most challenging and harrowing jobs that All Bay Cities Towing did took place in August 2021. The site was Mt. Diablo State Park, one of the highest mountains in California. A woman committed suicide, driving off the mountain and falling nearly 900 feet down. Her car, a Mercedes Benz, landed on boulders. There was concern by park officials as to how it was going to be brought up, as park officials were concerned about further damage done to the mountain and the park below it. The job almost had to be done with a helicopter. Charles’ son A.J. Scharff and Allen Beasy handled the job for the most part, first securing the vehicle, then getting it unstuck when it got caught on the boulders, brush and walls on the side of the mountain. Scharff also said maneuvering on that job proved to be quite a challenge. “It was tight,” he said. “It was a two-lane road, so we had our truck blocking the whole road, right up against the mountain with the boom hanging off the side of the cliff.” Public access to the mountain had to be closed for eight hours. All Bay Cities used four trucks for the job, which included their 2015 medium-duty Chevron 512, fronted with a Freightliner M2. No further damage was done to the park and mountain. A.J. and Allen expertly guided the vehicle up, placing debris in the car as they moved along. They also brushed over areas where the car made tread marks. “My son was pretty much in charge of that job. I couldn’t have been more proud of him,” Scharff smiles.