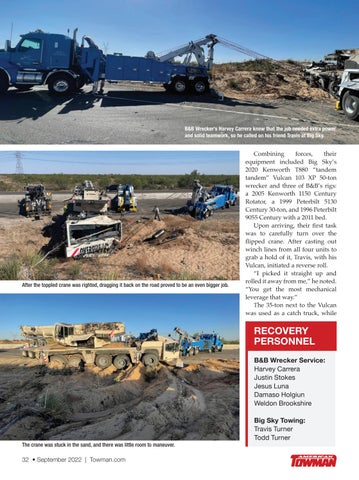 B&amp;B Wrecker’s Harvey Carrera knew that the job needed extra power and solid teamwork, so he called on his friend Travis at Big Sky.

After the toppled crane was righted, dragging it back on the road proved to be an even bigger job.

Combining forces, their equipment included Big Sky’s 2020 Kenworth T880 “tandem tandem” Vulcan 103 XP 50-ton wrecker and three of B&amp;B’s rigs: a 2005 Kenworth 1150 Century Rotator, a 1999 Peterbilt 5130 Century 30-ton, and 1996 Peterbilt 9055 Century with a 2011 bed. Upon arriving, their first task was to carefully turn over the flipped crane. After casting out winch lines from all four units to grab a hold of it, Travis, with his Vulcan, initiated a reverse roll. “I picked it straight up and rolled it away from me,” he noted. “You get the most mechanical leverage that way.” The 35-ton next to the Vulcan was used as a catch truck, while

The crane was stuck in the sand, and there was little room to maneuver.