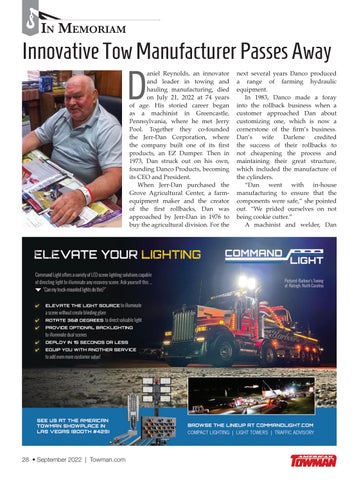 aniel Reynolds, an innovator and leader in towing and hauling manufacturing, died on July 21, 2022 at 74 years of age. His storied career began as a machinist in Greencastle, Pennsylvania, where he met Jerry Pool. Together they co-founded the Jerr-Dan Corporation, where the company built one of its first products, an EZ Dumper. Then in 1973, Dan struck out on his own, founding Danco Products, becoming its CEO and President. When Jerr-Dan purchased the Grove Agricultural Center, a farmequipment maker and the creator of the first rollbacks, Dan was approached by Jerr-Dan in 1976 to buy the agricultural division. For the

next several years Danco produced a range of farming hydraulic equipment. In 1983, Danco made a foray into the rollback business when a customer approached Dan about customizing one, which is now a cornerstone of the firm’s business. Dan’s wife Darlene credited the success of their rollbacks to not cheapening the process and maintaining their great structure, which included the manufacture of the cylinders. “Dan went with in-house manufacturing to ensure that the components were safe,” she pointed out. “We prided ourselves on not being cookie cutter.” A machinist and welder, Dan