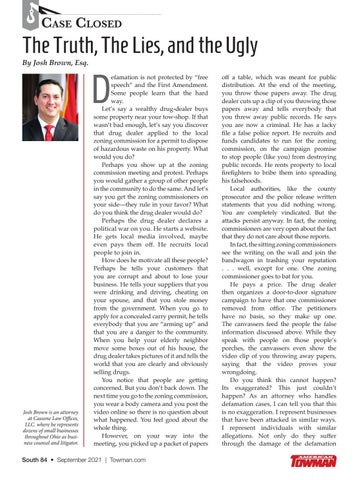 The Truth, The Lies, and the Ugly By Josh Brown, Esq.

efamation is not protected by “free speech” and the First Amendment. Some people learn that the hard way. Let’s say a wealthy drug-dealer buys some property near your tow-shop. If that wasn’t bad enough, let’s say you discover that drug dealer applied to the local zoning commission for a permit to dispose of hazardous waste on his property. What would you do? Perhaps you show up at the zoning commission meeting and protest. Perhaps you would gather a group of other people in the community to do the same. And let’s say you get the zoning commissioners on your side—they rule in your favor? What do you think the drug dealer would do? Perhaps the drug dealer declares a political war on you. He starts a website. He gets local media involved, maybe even pays them off. He recruits local people to join in. How does he motivate all these people? Perhaps he tells your customers that you are corrupt and about to lose your business. He tells your suppliers that you were drinking and driving, cheating on your spouse, and that you stole money from the government. When you go to apply for a concealed carry permit, he tells everybody that you are “arming up” and that you are a danger to the community. When you help your elderly neighbor move some boxes out of his house, the drug dealer takes pictures of it and tells the world that you are clearly and obviously selling drugs. You notice that people are getting concerned. But you don’t back down. The next time you go to the zoning commission, you wear a body camera and you post the video online so there is no question about what happened. You feel good about the whole thing. However, on your way into the meeting, you picked up a packet of papers

off a table, which was meant for public distribution. At the end of the meeting, you throw those papers away. The drug dealer cuts up a clip of you throwing those papers away and tells everybody that you threw away public records. He says you are now a criminal. He has a lacky file a false police report. He recruits and funds candidates to run for the zoning commission, on the campaign promise to stop people (like you) from destroying public records. He rents property to local firefighters to bribe them into spreading his falsehoods. Local authorities, like the county prosecutor and the police release written statements that you did nothing wrong. You are completely vindicated. But the attacks persist anyway. In fact, the zoning commissioners are very open about the fact that they do not care about those reports. In fact, the sitting zoning commissioners see the writing on the wall and join the bandwagon in trashing your reputation . . . well, except for one. One zoning commissioner goes to bat for you. He pays a price. The drug dealer then organizes a door-to-door signature campaign to have that one commissioner removed from office. The petitioners have no basis, so they make up one. The canvassers feed the people the false information discussed above. While they speak with people on those people’s porches, the canvassers even show the video clip of you throwing away papers, saying that the video proves your wrongdoing. Do you think this cannot happen? Its exaggerated? This just couldn’t happen? As an attorney who handles defamation cases, I can tell you that this is no exaggeration. I represent businesses that have been attacked in similar ways. I represent individuals with similar allegations. Not only do they suffer through the damage of the defamation