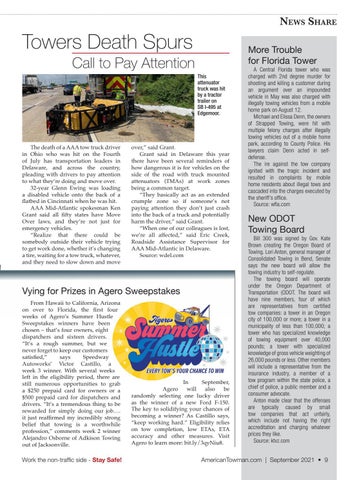 Call to Pay Attention This attenuator truck was hit by a tractor trailer on SB I-495 at Edgemoor.

The death of a AAA tow truck driver in Ohio who was hit on the Fourth of July has transportation leaders in Delaware, and across the country, pleading with drivers to pay attention to what they’re doing and move over. 32-year Glenn Ewing was loading a disabled vehicle onto the back of a flatbed in Cincinnati when he was hit. AAA Mid-Atlantic spokesman Ken Grant said all fifty states have Move Over laws, and they’re not just for emergency vehicles. “Realize that there could be somebody outside their vehicle trying to get work done, whether it’s changing a tire, waiting for a tow truck, whatever, and they need to slow down and move

over,” said Grant. Grant said in Delaware this year there have been several reminders of how dangerous it is for vehicles on the side of the road with truck mounted attenuators (TMAs) at work zones being a common target. “They basically act as an extended crumple zone so if someone’s not paying attention they don’t just crash into the back of a truck and potentially harm the driver,” said Grant. “When one of our colleagues is lost, we’re all affected,” said Eric Creek, Roadside Assistance Supervisor for AAA Mid-Atlantic in Delaware. Source: wdel.com

Vying for Prizes in Agero Sweepstakes From Hawaii to California, Arizona on over to Florida, the first four weeks of Agero’s Summer Hustle Sweepstakes winners have been chosen – that’s four owners, eight dispatchers and sixteen drivers. “It’s a rough summer, but we never forget to keep our customers satisfied,” says Speedway Autoworks’ Victor Castillo, a week 3 winner. With several weeks left in the eligibility period, there are still numerous opportunities to grab a $250 prepaid card for owners or a $500 prepaid card for dispatchers and drivers. “It’s a tremendous thing to be rewarded for simply doing our job…. it just reaffirmed my incredibly strong belief that towing is a worthwhile profession,” comments week 2 winner Alejandro Osborne of Adkison Towing out of Jacksonville.

In September, Agero will also be randomly selecting one lucky driver as the winner of a new Ford F-150. The key to solidifying your chances of becoming a winner? As Castillo says, “keep working hard.” Eligibility relies on tow completion, low ETAs, ETA accuracy and other measures. Visit Agero to learn more: bit.ly/3qyNiu8.

A Central Florida tower who was charged with 2nd degree murder for shooting and killing a customer during an argument over an impounded vehicle in May was also charged with illegally towing vehicles from a mobile home park on August 12. Michael and Elissa Denn, the owners of Strapped Towing, were hit with multiple felony charges after illegally towing vehicles out of a mobile home park, according to County Police. His lawyers claim Denn acted in selfdefense. The ire against the tow company ignited with the tragic incident and resulted in complaints by mobile home residents about illegal tows and cascaded into the charges executed by the sheriff’s office. Source: wfla.com

Bill 300 was signed by Gov. Kate Brown creating the Oregon Board of Towing. Lori Anton, general manager of Consolidated Towing in Bend, Senate says the new board will allow the towing industry to self-regulate. The towing board will operate under the Oregon Department of Transportation (ODOT. The board will have nine members, four of which are representatives from certified tow companies: a tower in an Oregon city of 100,000 or more; a tower in a municipality of less than 100,000; a tower who has specialized knowledge of towing equipment over 40,000 pounds; a tower with specialized knowledge of gross vehicle weighting of 26,000 pounds or less. Other members will include a representative from the insurance industry, a member of a tow program within the state police, a chief of police, a public member and a consumer advocate. Anton made clear that the offenses are typically caused by small tow companies that act unfairly, which include not having the right accreditation and charging whatever prices they like. Source: ktvz.com