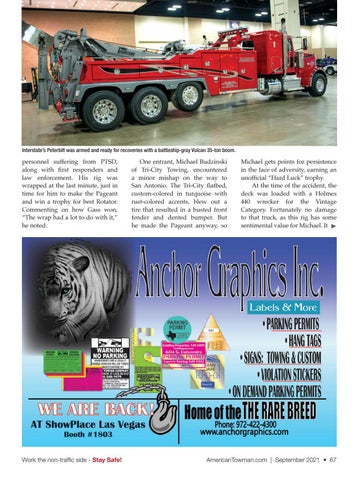 Interstate’s Peterbilt was armed and ready for recoveries with a battleship-gray Vulcan 35-ton boom.

personnel suffering from PTSD, along with first responders and law enforcement. His rig was wrapped at the last minute, just in time for him to make the Pageant and win a trophy for best Rotator. Commenting on how Gass won, “The wrap had a lot to do with it,” he noted.

One entrant, Michael Budzinski of Tri-City Towing, encountered a minor mishap on the way to San Antonio. The Tri-City flatbed, custom-colored in turquoise with rust-colored accents, blew out a tire that resulted in a busted front fender and dented bumper. But he made the Pageant anyway, so

Michael gets points for persistence in the face of adversity, earning an unofficial “Hard Luck” trophy. At the time of the accident, the deck was loaded with a Holmes 440 wrecker for the Vintage Category. Fortunately no damage to that truck, as this rig has some sentimental value for Michael. It