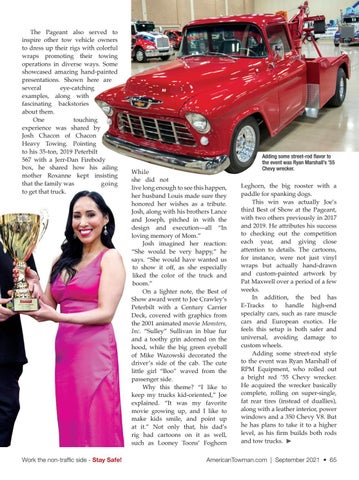 The Pageant also served to inspire other tow vehicle owners to dress up their rigs with colorful wraps promoting their towing operations in diverse ways. Some showcased amazing hand-painted presentations. Shown here are several eye-catching examples, along with fascinating backstories about them. One touching experience was shared by Josh Chacon of Chacon Heavy Towing. Pointing to his 35-ton, 2019 Peterbilt 567 with a Jerr-Dan Firebody box, he shared how his ailing mother Roxanne kept insisting that the family was going to get that truck.

While she did not live long enough to see this happen, her husband Louis made sure they honored her wishes as a tribute. Josh, along with his brothers Lance and Joseph, pitched in with the design and execution—all “In loving memory of Mom.” Josh imagined her reaction: “She would be very happy,” he says. “She would have wanted us to show it off, as she especially liked the color of the truck and boom.” On a lighter note, the Best of Show award went to Joe Crawley’s Peterbilt with a Century Carrier Deck, covered with graphics from the 2001 animated movie Monsters, Inc. “Sulley” Sullivan in blue fur and a toothy grin adorned on the hood, while the big green eyeball of Mike Wazowski decorated the driver’s side of the cab. The cute little girl “Boo” waved from the passenger side. Why this theme? “I like to keep my trucks kid-oriented,” Joe explained. “It was my favorite movie growing up, and I like to make kids smile, and point up at it.” Not only that, his dad’s rig had cartoons on it as well, such as Looney Toons’ Foghorn

Adding some street-rod flavor to the event was Ryan Marshall’s ’55 Chevy wrecker.

Leghorn, the big rooster with a paddle for spanking dogs. This win was actually Joe’s third Best of Show at the Pageant, with two others previously in 2017 and 2019. He attributes his success to checking out the competition each year, and giving close attention to details. The cartoons, for instance, were not just vinyl wraps but actually hand-drawn and custom-painted artwork by Pat Maxwell over a period of a few weeks. In addition, the bed has E-Tracks to handle high-end specialty cars, such as rare muscle cars and European exotics. He feels this setup is both safer and universal, avoiding damage to custom wheels. Adding some street-rod style to the event was Ryan Marshall of RPM Equipment, who rolled out a bright red ’55 Chevy wrecker. He acquired the wrecker basically complete, rolling on super-single, fat rear tires (instead of duallies), along with a leather interior, power windows and a 350 Chevy V8. But he has plans to take it to a higher level, as his firm builds both rods and tow trucks.