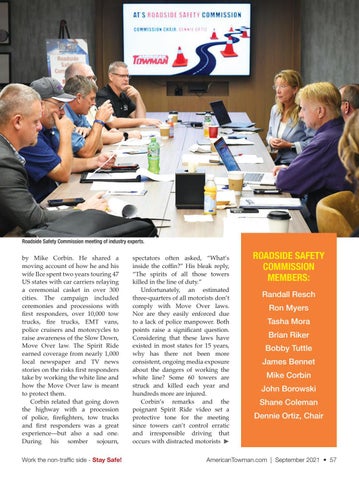 by Mike Corbin. He shared a moving account of how he and his wife Ilce spent two years touring 47 US states with car carriers relaying a ceremonial casket in over 300 cities. The campaign included ceremonies and processions with first responders, over 10,000 tow trucks, fire trucks, EMT vans, police cruisers and motorcycles to raise awareness of the Slow Down, Move Over law. The Spirit Ride earned coverage from nearly 1,000 local newspaper and TV news stories on the risks first responders take by working the white line and how the Move Over law is meant to protect them. Corbin related that going down the highway with a procession of police, firefighters, tow trucks and first responders was a great experience—but also a sad one. During his somber sojourn, Work the non-traffic side - Stay Safe!

spectators often asked, “What’s inside the coffin?” His bleak reply, “The spirits of all those towers killed in the line of duty.” Unfortunately, an estimated three-quarters of all motorists don’t comply with Move Over laws. Nor are they easily enforced due to a lack of police manpower. Both points raise a significant question. Considering that these laws have existed in most states for 15 years, why has there not been more consistent, ongoing media exposure about the dangers of working the white line? Some 60 towers are struck and killed each year and hundreds more are injured. Corbin’s remarks and the poignant Spirit Ride video set a protective tone for the meeting since towers can’t control erratic and irresponsible driving that occurs with distracted motorists