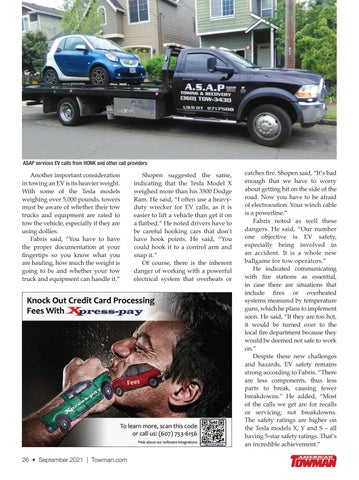 ASAP services EV calls from HONK and other call providers

Another important consideration in towing an EV is its heavier weight. With some of the Tesla models weighing over 5,000 pounds, towers must be aware of whether their tow trucks and equipment are rated to tow the vehicle, especially if they are using dollies. Fabris said, “You have to have the proper documentation at your fingertips so you know what you are hauling, how much the weight is going to be and whether your tow truck and equipment can handle it.”

Shopen suggested the same, indicating that the Tesla Model X weighed more than his 3500 Dodge Ram. He said, “I often use a heavyduty wrecker for EV calls, as it is easier to lift a vehicle than get it on a flatbed.” He noted drivers have to be careful hooking cars that don’t have hook points. He said, “You could hook it to a control arm and snap it.” Of course, there is the inherent danger of working with a powerful electrical system that overheats or

catches fire. Shopen said, “It’s bad enough that we have to worry about getting hit on the side of the road. Now you have to be afraid of electrocution. Your winch cable is a powerline.” Fabris noted as well these dangers. He said, “Our number one objective is EV safety, especially being involved in an accident. It is a whole new ballgame for tow operators.” He indicated communicating with fire stations as essential, in case there are situations that include fires or overheated systems measured by temperature guns, which he plans to implement soon. He said, “If they are too hot, it would be turned over to the local fire department because they would be deemed not safe to work on.” Despite these new challenges and hazards, EV safety remains strong according to Fabris. “There are less components, thus less parts to break, causing fewer breakdowns.” He added, “Most of the calls we get are for recalls or servicing; not breakdowns. The safety ratings are higher on the Tesla models X, Y and S – all having 5-star safety ratings. That’s an incredible achievement.”