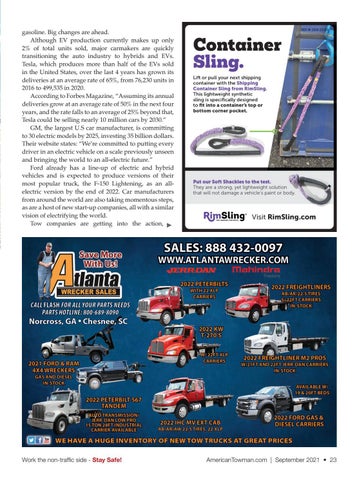 gasoline. Big changes are ahead. Although EV production currently makes up only 2% of total units sold, major carmakers are quickly transitioning the auto industry to hybrids and EVs. Tesla, which produces more than half of the EVs sold in the United States, over the last 4 years has grown its deliveries at an average rate of 65%, from 76,230 units in 2016 to 499,535 in 2020. According to Forbes Magazine, “Assuming its annual deliveries grow at an average rate of 50% in the next four years, and the rate falls to an average of 25% beyond that, Tesla could be selling nearly 10 million cars by 2030.” GM, the largest U.S car manufacturer, is committing to 30 electric models by 2025, investing 35 billion dollars. Their website states: “We’re committed to putting every driver in an electric vehicle on a scale previously unseen and bringing the world to an all-electric future.” Ford already has a line-up of electric and hybrid vehicles and is expected to produce versions of their most popular truck, the F-150 Lightening, as an allelectric version by the end of 2022. Car manufacturers from around the world are also taking momentous steps, as are a host of new start-up companies, all with a similar vision of electrifying the world. Tow companies are getting into the action,