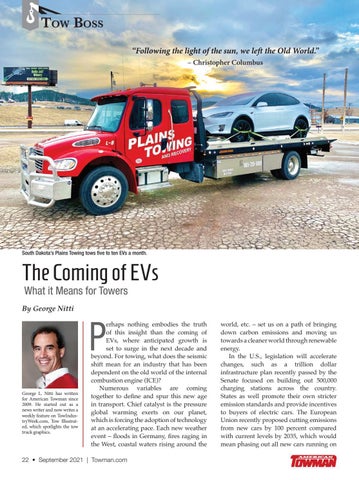 Tow Boss “Following the light of the sun, we left the Old World.” – Christopher Columbus

The Coming of EVs What it Means for Towers

George L. Nitti has written for American Towman since 2009. He started out as a news writer and now writes a weekly feature on TowIndustryWeek.com, Tow Illustrated, which spotlights the tow truck graphics.

erhaps nothing embodies the truth of this insight than the coming of EVs, where anticipated growth is set to surge in the next decade and beyond. For towing, what does the seismic shift mean for an industry that has been dependent on the old world of the internal combustion engine (ICE)? Numerous variables are coming together to define and spur this new age in transport. Chief catalyst is the pressure global warming exerts on our planet, which is forcing the adoption of technology at an accelerating pace. Each new weather event – floods in Germany, fires raging in the West, coastal waters rising around the

world, etc. – set us on a path of bringing down carbon emissions and moving us towards a cleaner world through renewable energy. In the U.S., legislation will accelerate changes, such as a trillion dollar infrastructure plan recently passed by the Senate focused on building out 500,000 charging stations across the country. States as well promote their own stricter emission standards and provide incentives to buyers of electric cars. The European Union recently proposed cutting emissions from new cars by 100 percent compared with current levels by 2035, which would mean phasing out all new cars running on