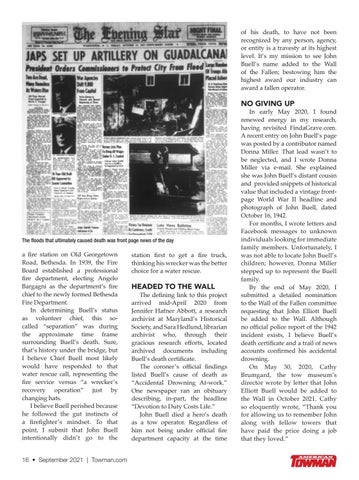 of his death, to have not been recognized by any person, agency, or entity is a travesty at its highest level. It’s my mission to see John Buell’s name added to the Wall of the Fallen; bestowing him the highest award our industry can award a fallen operator.

a fire station on Old Georgetown Road, Bethesda. In 1939, the Fire Board established a professional fire department, electing Angelo Bargagni as the department’s fire chief to the newly formed Bethesda Fire Department. In determining Buell’s status as volunteer chief, this socalled “separation” was during the approximate time frame surrounding Buell’s death. Sure, that’s history under the bridge, but I believe Chief Buell most likely would have responded to that water rescue call, representing the fire service versus “a wrecker’s recovery operation” just by changing hats. I believe Buell perished because he followed the gut instincts of a firefighter’s mindset. To that point, I submit that John Buell intentionally didn’t go to the 16 • September 2021 | Towman.com

station first to get a fire truck, thinking his wrecker was the better choice for a water rescue.

HEADED TO THE WALL

The defining link to this project arrived mid-April 2020 from Jennifer Hafner Abbott, a research archivist at Maryland’s Historical Society, and Sara Hedlund, librarian archivist who, through their gracious research efforts, located archived documents including Buell’s death certificate. The coroner’s official findings listed Buell’s cause of death as “Accidental Drowning At-work.” One newspaper ran an obituary describing, in-part, the headline “Devotion to Duty Costs Life.” John Buell died a hero’s death as a tow operator. Regardless of him not being under official fire department capacity at the time

In early May 2020, I found renewed energy in my research, having revisited FindaGrave.com. A recent entry on John Buell’s page was posted by a contributor named Donna Miller. That lead wasn’t to be neglected, and I wrote Donna Miller via e-mail. She explained she was John Buell’s distant cousin and provided snippets of historical value that included a vintage frontpage World War II headline and photograph of John Buell, dated October 16, 1942. For months, I wrote letters and Facebook messages to unknown individuals looking for immediate family members. Unfortunately, I was not able to locate John Buell’s children; however, Donna Miller stepped up to represent the Buell family. By the end of May 2020, I submitted a detailed nomination to the Wall of the Fallen committee requesting that John Elliott Buell be added to the Wall. Although no official police report of the 1942 incident exists, I believe Buell’s death certificate and a trail of news accounts confirmed his accidental drowning. On May 30, 2020, Cathy Brumgard, the tow museum’s director wrote by letter that John Elliott Buell would be added to the Wall in October 2021. Cathy so eloquently wrote, “Thank you for allowing us to remember John along with fellow towers that have paid the price doing a job that they loved.”