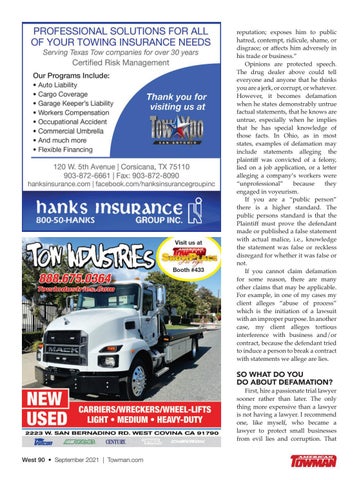 reputation; exposes him to public hatred, contempt, ridicule, shame, or disgrace; or affects him adversely in his trade or business.” Opinions are protected speech. The drug dealer above could tell everyone and anyone that he thinks you are a jerk, or corrupt, or whatever. However, it becomes defamation when he states demonstrably untrue factual statements, that he knows are untrue, especially when he implies that he has special knowledge of those facts. In Ohio, as in most states, examples of defamation may include statements alleging the plaintiff was convicted of a felony, lied on a job application, or a letter alleging a company’s workers were “unprofessional” because they engaged in voyeurism. If you are a “public person” there is a higher standard. The public persons standard is that the Plaintiff must prove the defendant made or published a false statement with actual malice, i.e., knowledge the statement was false or reckless disregard for whether it was false or not. If you cannot claim defamation for some reason, there are many other claims that may be applicable. For example, in one of my cases my client alleges “abuse of process” which is the initiation of a lawsuit with an improper purpose. In another case, my client alleges tortious interference with business and/or contract, because the defendant tried to induce a person to break a contract with statements we allege are lies.

First, hire a passionate trial lawyer sooner rather than later. The only thing more expensive than a lawyer is not having a lawyer. I recommend one, like myself, who became a lawyer to protect small businesses from evil lies and corruption. That West 90 • September 2021 | Towman.com