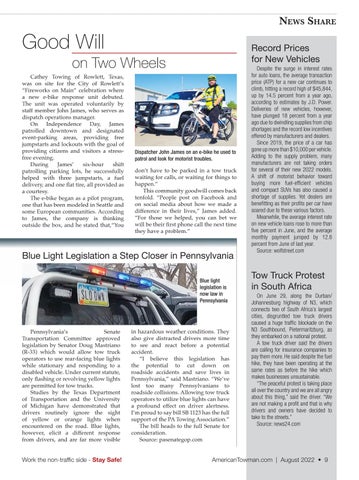 Cathey Towing of Rowlett, Texas, was on site for the City of Rowlett’s “Fireworks on Main” celebration where a new e-bike response unit debuted. The unit was operated voluntarily by staff member John James, who serves as dispatch operations manager. On Independence Day, James patrolled downtown and designated event-parking areas, providing free jumpstarts and lockouts with the goal of providing citizens and visitors a stressfree evening. During James’ six-hour shift patrolling parking lots, he successfully helped with three jumpstarts, a fuel delivery, and one flat tire, all provided as a courtesy. The e-bike began as a pilot program, one that has been modeled in Seattle and some European communities. According to James, the company is thinking outside the box, and he stated that,“You

Dispatcher John James on an e-bike he used to patrol and look for motorist troubles. don’t have to be parked in a tow truck waiting for calls, or waiting for things to happen.” This community goodwill comes back tenfold. “People post on Facebook and on social media about how we made a difference in their lives,” James added. “For those we helped, you can bet we will be their first phone call the next time they have a problem.”

Pennsylvania’s Senate Transportation Committee approved legislation by Senator Doug Mastriano (R-33) which would allow tow truck operators to use rear-facing blue lights while stationary and responding to a disabled vehicle. Under current statute, only flashing or revolving yellow lights are permitted for tow trucks. Studies by the Texas Department of Transportation and the University of Michigan have demonstrated that drivers routinely ignore the sight of yellow or orange lights when encountered on the road. Blue lights, however, elicit a different response from drivers, and are far more visible

in hazardous weather conditions. They also give distracted drivers more time to see and react before a potential accident. “I believe this legislation has the potential to cut down on roadside accidents and save lives in Pennsylvania,” said Mastriano. “We’ve lost too many Pennsylvanians to roadside collisions. Allowing tow truck operators to utilize blue lights can have a profound effect on driver alertness. I’m proud to say bill SB 1123 has the full support of the PA Towing Association.” The bill heads to the full Senate for consideration. Source: pasenategop.com

Despite the surge in interest rates for auto loans, the average transaction price (ATP) for a new car continues to climb, hitting a record high of $45,844, up by 14.5 percent from a year ago, according to estimates by J.D. Power. Deliveries of new vehicles, however, have plunged 18 percent from a year ago due to dwindling supplies from chip shortages and the record low incentives offered by manufacturers and dealers. Since 2019, the price of a car has gone up more than $10,000 per vehicle. Adding to the supply problem, many manufacturers are not taking orders for several of their new 2022 models. A shift of motorist behavior toward buying more fuel-efficient vehicles and compact SUVs has also caused a shortage of supplies. Yet dealers are benefitting as their profits per car have soared due to these various factors. Meanwhile, the average interest rate on new vehicle loans rose to more than five percent in June, and the average monthly payment jumped by 12.8 percent from June of last year. Source: wolfstreet.com

On June 29, along the Durban/ Johannesburg highway of N3, which connects two of South Africa’s largest cities, disgruntled tow truck drivers caused a huge traffic blockade on the N3 Southbound, Pietermaritzburg, as they embarked on a national protest. A tow truck driver said the drivers are calling for insurance companies to pay them more. He said despite the fuel hike, they have been operating at the same rates as before the hike which makes businesses unsustainable. “The peaceful protest is taking place all over the country and we are all angry about this thing,” said the driver. “We are not making a profit and that is why drivers and owners have decided to take to the streets.” Source: news24.com