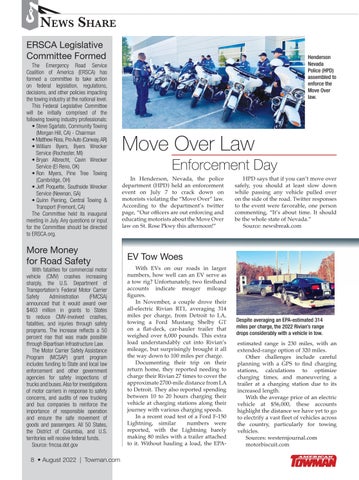 With fatalities for commercial motor vehicle (CMV) crashes increasing sharply, the U.S. Department of Transportation’s Federal Motor Carrier Safety Administration (FMCSA) announced that it would award over $463 million in grants to States to reduce CMV-involved crashes, fatalities, and injuries through safety programs. The increase reflects a 50 percent rise that was made possible through Bipartisan Infrastructure Law. The Motor Carrier Safety Assistance Program (MCSAP) grant program includes funding to State and local law enforcement and other government agencies for safety inspections of trucks and buses. Also for investigations of motor carriers in response to safety concerns, and audits of new trucking and bus companies to reinforce the importance of responsible operation and ensure the safe movement of goods and passengers. All 50 States, the District of Columbia, and U.S. territories will receive federal funds. Source: fmcsa.dot.gov

In Henderson, Nevada, the police department (HPD) held an enforcement event on July 7 to crack down on motorists violating the “Move Over” law. According to the department’s twitter page, “Our officers are out enforcing and educating motorists about the Move Over law on St. Rose Pkwy this afternoon!”

HPD says that if you can’t move over safely, you should at least slow down while passing any vehicle pulled over on the side of the road. Twitter responses to the event were favorable, one person commenting, “It’s about time. It should be the whole state of Nevada.” Source: newsbreak.com

With EVs on our roads in larger numbers, how well can an EV serve as a tow rig? Unfortunately, two firsthand accounts indicate meager mileage figures. In November, a couple drove their all-electric Rivian RT1, averaging 314 miles per charge, from Detroit to LA, towing a Ford Mustang Shelby GT on a flat-deck, car-hauler trailer that weighed over 6,000 pounds. This extra load understandably cut into Rivian’s mileage, but surprisingly brought it all the way down to 100 miles per charge. Documenting their trip on their return home, they reported needing to charge their Rivian 27 times to cover the approximate 2700-mile distance from LA to Detroit. They also reported spending between 10 to 20 hours charging their vehicle at charging stations along their journey with various charging speeds. In a recent road test of a Ford F-150 Lightning, similar numbers were reported, with the Lightning barely making 80 miles with a trailer attached to it. Without hauling a load, the EPA-

Despite averaging an EPA-estimated 314 miles per charge, the 2022 Rivian’s range drops considerably with a vehicle in tow. estimated range is 230 miles, with an extended-range option of 320 miles. Other challenges include careful planning with a GPS to find charging stations, calculations to optimize charging times, and maneuvering a trailer at a charging station due to its increased length. With the average price of an electric vehicle at $56,000, these accounts highlight the distance we have yet to go to electrify a vast fleet of vehicles across the country, particularly for towing vehicles. Sources: westernjournal.com motorbiscuit.com