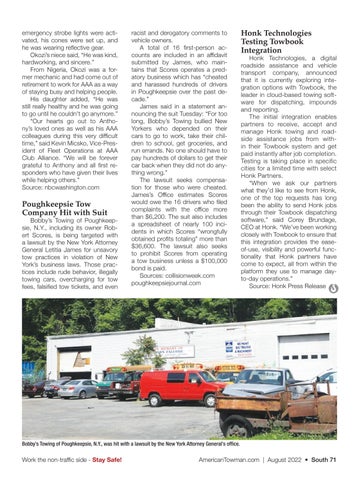 emergency strobe lights were activated, his cones were set up, and he was wearing reflective gear. Okozi’s niece said, “He was kind, hardworking, and sincere.” From Nigeria, Okozi was a former mechanic and had come out of retirement to work for AAA as a way of staying busy and helping people. His daughter added, “He was still really healthy and he was going to go until he couldn’t go anymore.” “Our hearts go out to Anthony’s loved ones as well as his AAA colleagues during this very difficult time,” said Kevin Micsko, Vice-President of Fleet Operations at AAA Club Alliance. “We will be forever grateful to Anthony and all first responders who have given their lives while helping others.” Source: nbcwashington.com

Bobby’s Towing of Poughkeepsie, N.Y., including its owner Robert Scores, is being targeted with a lawsuit by the New York Attorney General Letitia James for unsavory tow practices in violation of New York’s business laws. Those practices include rude behavior, illegally towing cars, overcharging for tow fees, falsified tow tickets, and even

racist and derogatory comments to vehicle owners. A total of 16 first-person accounts are included in an affidavit submitted by James, who maintains that Scores operates a predatory business which has “cheated and harassed hundreds of drivers in Poughkeepsie over the past decade.” James said in a statement announcing the suit Tuesday: “For too long, Bobby’s Towing bullied New Yorkers who depended on their cars to go to work, take their children to school, get groceries, and run errands. No one should have to pay hundreds of dollars to get their car back when they did not do anything wrong.” The lawsuit seeks compensation for those who were cheated. James’s Office estimates Scores would owe the 16 drivers who filed complaints with the office more than $6,200. The suit also includes a spreadsheet of nearly 100 incidents in which Scores “wrongfully obtained profits totaling” more than $36,600. The lawsuit also seeks to prohibit Scores from operating a tow business unless a $100,000 bond is paid. Sources: collisionweek.com poughkeepsiejournal.com

Honk Technologies, a digital roadside assistance and vehicle transport company, announced that it is currently exploring integration options with Towbook, the leader in cloud-based towing software for dispatching, impounds and reporting. The initial integration enables partners to receive, accept and manage Honk towing and roadside assistance jobs from within their Towbook system and get paid instantly after job completion. Testing is taking place in specific cities for a limited time with select Honk Partners. “When we ask our partners what they’d like to see from Honk, one of the top requests has long been the ability to send Honk jobs through their Towbook dispatching software,” said Corey Brundage, CEO at Honk. “We’ve been working closely with Towbook to ensure that this integration provides the easeof-use, visibility and powerful functionality that Honk partners have come to expect, all from within the platform they use to manage dayto-day operations.” Source: Honk Press Release

Bobby’s Towing of Poughkeepsie, N.Y., was hit with a lawsuit by the New York Attorney General’s office.