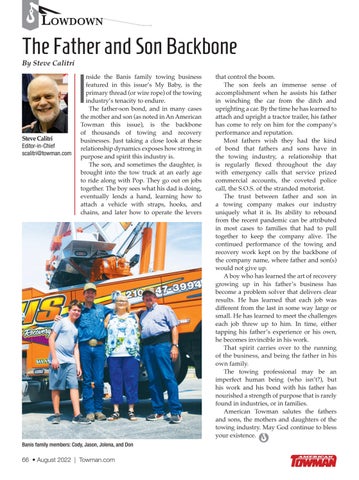 The Father and Son Backbone By Steve Calitri

nside the Banis family towing business featured in this issue’s My Baby, is the primary thread (or wire rope) of the towing industry’s tenacity to endure. The father-son bond, and in many cases the mother and son (as noted in An American Towman this issue), is the backbone of thousands of towing and recovery businesses. Just taking a close look at these relationship dynamics exposes how strong in purpose and spirit this industry is. The son, and sometimes the daughter, is brought into the tow truck at an early age to ride along with Pop. They go out on jobs together. The boy sees what his dad is doing, eventually lends a hand, learning how to attach a vehicle with straps, hooks, and chains, and later how to operate the levers

that control the boom. The son feels an immense sense of accomplishment when he assists his father in winching the car from the ditch and uprighting a car. By the time he has learned to attach and upright a tractor trailer, his father has come to rely on him for the company’s performance and reputation. Most fathers wish they had the kind of bond that fathers and sons have in the towing industry, a relationship that is regularly flexed throughout the day with emergency calls that service prized commercial accounts, the coveted police call, the S.O.S. of the stranded motorist. The trust between father and son in a towing company makes our industry uniquely what it is. Its ability to rebound from the recent pandemic can be attributed in most cases to families that had to pull together to keep the company alive. The continued performance of the towing and recovery work kept on by the backbone of the company name, where father and son(s) would not give up. A boy who has learned the art of recovery growing up in his father’s business has become a problem solver that delivers clear results. He has learned that each job was different from the last in some way large or small. He has learned to meet the challenges each job threw up to him. In time, either tapping his father’s experience or his own, he becomes invincible in his work. That spirit carries over to the running of the business, and being the father in his own family. The towing professional may be an imperfect human being (who isn’t?), but his work and his bond with his father has nourished a strength of purpose that is rarely found in industries, or in families. American Towman salutes the fathers and sons, the mothers and daughters of the towing industry. May God continue to bless your existence.