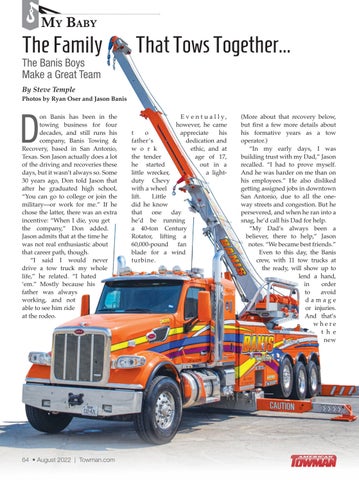 on Banis has been in the towing business for four decades, and still runs his company, Banis Towing &amp; Recovery, based in San Antonio, Texas. Son Jason actually does a lot of the driving and recoveries these days, but it wasn’t always so. Some 30 years ago, Don told Jason that after he graduated high school, “You can go to college or join the military—or work for me.” If he chose the latter, there was an extra incentive: “When I die, you get the company,” Don added. Jason admits that at the time he was not real enthusiastic about that career path, though. “I said I would never drive a tow truck my whole life,” he related. “I hated ‘em.” Mostly because his father was always working, and not able to see him ride at the rodeo.

E v e n t u a l l y, however, he came t o appreciate his father’s dedication and w o r k ethic, and at the tender age of 17, he started out in a little wrecker, a lightduty Chevy with a wheel lift. Little did he know that one day he’d be running a 40-ton Century Rotator, lifting a 60,000-pound fan blade for a wind turbine.

(More about that recovery below, but first a few more details about his formative years as a tow operator.) “In my early days, I was building trust with my Dad,” Jason recalled. “I had to prove myself. And he was harder on me than on his employees.” He also disliked getting assigned jobs in downtown San Antonio, due to all the oneway streets and congestion. But he persevered, and when he ran into a snag, he’d call his Dad for help. “My Dad’s always been a believer, there to help,” Jason notes. “We became best friends.” Even to this day, the Banis crew, with 11 tow trucks at the ready, will show up to lend a hand, in order to avoid damage or injuries. And that’s where t h e new