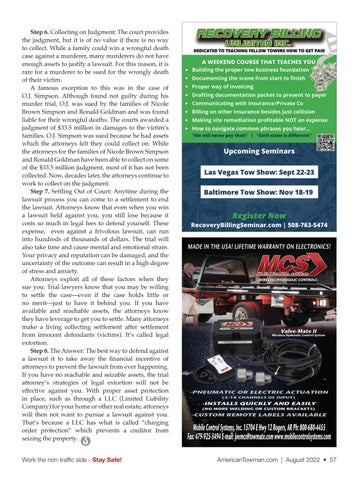 Step 6. Collecting on Judgment: The court provides the judgment, but it is of no value if there is no way to collect. While a family could win a wrongful death case against a murderer, many murderers do not have enough assets to justify a lawsuit. For this reason, it is rare for a murderer to be sued for the wrongly death of their victim. A famous exception to this was in the case of O.J. Simpson. Although found not guilty during his murder trial, O.J. was sued by the families of Nicole Brown Simpson and Ronald Goldman and was found liable for their wrongful deaths. The courts awarded a judgment of $33.5 million in damages to the victim’s families. O.J. Simpson was sued because he had assets which the attorneys felt they could collect on. While the attorneys for the families of Nicole Brown Simpson and Ronald Goldman have been able to collect on some of the $33.5 million judgment, most of it has not been collected. Now, decades later, the attorneys continue to work to collect on the judgment. Step 7. Settling Out of Court: Anytime during the lawsuit process you can come to a settlement to end the lawsuit. Attorneys know that even when you win a lawsuit held against you, you still lose because it costs so much in legal fees to defend yourself. These expense, even against a frivolous lawsuit, can run into hundreds of thousands of dollars. The trial will also take time and cause mental and emotional strain. Your privacy and reputation can be damaged, and the uncertainty of the outcome can result in a high degree of stress and anxiety. Attorneys exploit all of these factors when they sue you. Trial lawyers know that you may be willing to settle the case—even if the case holds little or no merit—just to have it behind you. If you have available and reachable assets, the attorneys know they have leverage to get you to settle. Many attorneys make a living collecting settlement after settlement from innocent defendants (victims). It’s called legal extortion. Step 8. The Answer: The best way to defend against a lawsuit it to take away the financial incentive of attorneys to prevent the lawsuit from ever happening. If you have no reachable and seizable assets, the trial attorney’s strategies of legal extortion will not be effective against you. With proper asset protection in place, such as through a LLC (Limited Liability Company) for your home or other real estate, attorneys will then not want to pursue a lawsuit against you. That’s because a LLC has what is called “charging order protection” which prevents a creditor from seizing the property. Work the non-traffic side - Stay Safe!