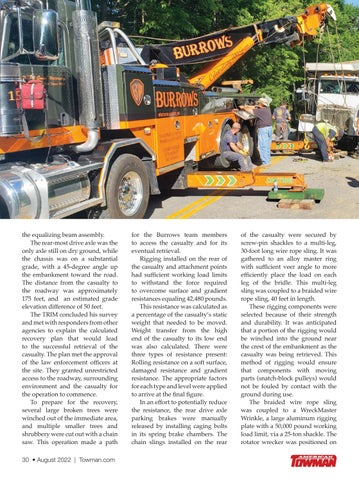 the equalizing beam assembly. The rear-most drive axle was the only axle still on dry ground, while the chassis was on a substantial grade, with a 45-degree angle up the embankment toward the road. The distance from the casualty to the roadway was approximately 175 feet, and an estimated grade elevation difference of 50 feet. The TRIM concluded his survey and met with responders from other agencies to explain the calculated recovery plan that would lead to the successful retrieval of the casualty. The plan met the approval of the law enforcement officers at the site. They granted unrestricted access to the roadway, surrounding environment and the casualty for the operation to commence. To prepare for the recovery, several large broken trees were winched out of the immediate area, and multiple smaller trees and shrubbery were cut out with a chain saw. This operation made a path 30 • August 2022 | Towman.com

for the Burrows team members to access the casualty and for its eventual retrieval. Rigging installed on the rear of the casualty and attachment points had sufficient working load limits to withstand the force required to overcome surface and gradient resistances equaling 42,480 pounds. This resistance was calculated as a percentage of the casualty’s static weight that needed to be moved. Weight transfer from the high end of the casualty to its low end was also calculated. There were three types of resistance present: Rolling resistance on a soft surface, damaged resistance and gradient resistance. The appropriate factors for each type and level were applied to arrive at the final figure. In an effort to potentially reduce the resistance, the rear drive axle parking brakes were manually released by installing caging bolts in its spring brake chambers. The chain slings installed on the rear

of the casualty were secured by screw-pin shackles to a multi-leg, 30-foot long wire rope sling. It was gathered to an alloy master ring with sufficient veer angle to more efficiently place the load on each leg of the bridle. This multi-leg sling was coupled to a braided wire rope sling, 40 feet in length. These rigging components were selected because of their strength and durability. It was anticipated that a portion of the rigging would be winched into the ground near the crest of the embankment as the casualty was being retrieved. This method of rigging would ensure that components with moving parts (snatch-block pulleys) would not be fouled by contact with the ground during use. The braided wire rope sling was coupled to a WreckMaster Wrinkle, a large aluminum rigging plate with a 50,000 pound working load limit, via a 25-ton shackle. The rotator wrecker was positioned on