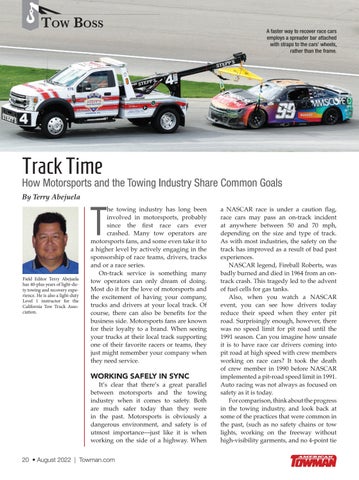 A faster way to recover race cars employs a spreader bar attached with straps to the cars’ wheels, rather than the frame.

Field Editor Terry Abejuela has 40-plus years of light-duty towing and recovery experience. He is also a light-duty Level 1 instructor for the California Tow Truck Association.

he towing industry has long been involved in motorsports, probably since the first race cars ever crashed. Many tow operators are motorsports fans, and some even take it to a higher level by actively engaging in the sponsorship of race teams, drivers, tracks and or a race series. On-track service is something many tow operators can only dream of doing. Most do it for the love of motorsports and the excitement of having your company, trucks and drivers at your local track. Of course, there can also be benefits for the business side. Motorsports fans are known for their loyalty to a brand. When seeing your trucks at their local track supporting one of their favorite racers or teams, they just might remember your company when they need service.

It’s clear that there’s a great parallel between motorsports and the towing industry when it comes to safety. Both are much safer today than they were in the past. Motorsports is obviously a dangerous environment, and safety is of utmost importance—just like it is when working on the side of a highway. When 20 • August 2022 | Towman.com

a NASCAR race is under a caution flag, race cars may pass an on-track incident at anywhere between 50 and 70 mph, depending on the size and type of track. As with most industries, the safety on the track has improved as a result of bad past experiences. NASCAR legend, Fireball Roberts, was badly burned and died in 1964 from an ontrack crash. This tragedy led to the advent of fuel cells for gas tanks. Also, when you watch a NASCAR event, you can see how drivers today reduce their speed when they enter pit road. Surprisingly enough, however, there was no speed limit for pit road until the 1991 season. Can you imagine how unsafe it is to have race car drivers coming into pit road at high speed with crew members working on race cars? It took the death of crew member in 1990 before NASCAR implemented a pit-road speed limit in 1991. Auto racing was not always as focused on safety as it is today. For comparison, think about the progress in the towing industry, and look back at some of the practices that were common in the past, (such as no safety chains or tow lights, working on the freeway without high-visibility garments, and no 4-point tie